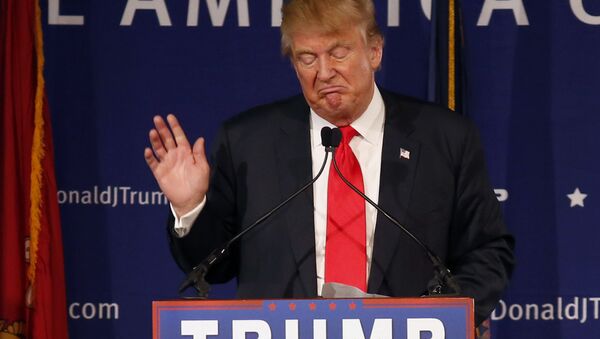 Finian Cunningham
All materials
Donald Trump has entered a political kill zone. And the American establishment is lining up to take him out. We are talking here in virtual terms - at least thus far.

Nowadays, political assassination by US powers-that-be does not necessarily involve physical liquidation of the individual deemed to be an enemy of the state. Who needs all that blood and controversy? Especially when character assassination achieves the same desired end result — that is, elimination of target from the public domain.

The fierce media crossfire that the Republican presidential contender is being subjected to leaves little doubt that this is a concerted effort to destroy this politician.

In the past week, we have seen a fusillade of vilification fired at the New York property tycoon-turned presidential hopeful. Everything, it seems, has been thrown at him, from his Slovenian-born wife's alleged US visa violations, to his bullying of crying babies at rallies, to his serving as an unwitting agent for Russian leader Vladimir Putin.

It's so transparent and preposterous, it is almost hilarious.

Evidently, the US corporate news media are out to bring Trump down in spite of his stubborn support among ordinary Republican voters. It is obvious that the Washington establishment has determined that Democrat rival Hillary Clinton is the preferred choice to protect their privileged interests as the next occupant of the White House.

And the US media — as a pillar of the establishment — is doing its bit to eliminate Trump from the supposedly free presidential election due in November by aiding and abetting in assassinating his character in the eyes of the public.

If Hillary Becomes US President, She 'Will Look for Excuses to Bomb Damascus'
It is ironic really given that there is so much more sordid stories to be reported on Clinton, given her involvement in warmongering, clandestine regime-change operations and abuse of state secrecy for her own self-aggrandizement with foreign sources of money.

The latest sign that the secretive US Deep State — Pentagon, CIA, FBI, Wall Street financiers — is moving to install their White House candidate is the letter published this week by some 50 senior Republican "national security experts" who endorsed Clinton while eviscerating Trump.

Yes, that's right, Republicans backing a Democrat. Which just goes to show the uniformity of interests.

The signatories included former CIA director Michael Hayden, ex-chief of homeland security Michael Chertoff, both of whom served in the George W Bush administration, as well as John Negroponte who was a former director of national intelligence and alleged purveyor of death squads in Central America during the 1980s.

The joint anti-Trump letter followed the publication only days ago of an oped piece in the New York Times by another ex-CIA head, Michael Morell in which he lambasted Trump as a Russian stooge.

All of these figures are intimately connected to the US Deep State and all are unanimously pillorying Trump as a "dangerous threat to American national security".

For his part, Trump rebuffed the latest volley of vilification by saying that the list of national security "experts" are responsible for creating the Iraq war, the loss of American troops' lives and the rise of terrorism across the Middle East. Cheekily, he thanked them for all going public with their names so that the American people can hold them to account for foreign policy disasters.

However, the point here is that the campaign to discredit Trump is not just some haphazard run of bad luck on the candidate's part for mis-steps and mis-speaks that he may have issued on the hustings trail.

The intense, concerted nature of the campaign to destroy Trump demonstrates how the Washington power structure, including the corporate media, is setting him up for character assassination.

This is the kind of political liquidation that the American plutocracy excels at.

A few decades ago, American "executive action" — or "termination with extreme prejudice — involved, more often than not, literally murdering the individual target.

The most notorious case is that of President John F Kennedy who was assassinated on November 22, 1963, in Dallas. Around that time, several other foreign political leaders were also killed by American state agents, including Patrice Lumumba of Congo, Rafael Trujillo of Dominican Republic and Ngo Dinh Diem of South Vietnam. Political murder was, still is, par for the American course.

US Hypocrisy Over 'Draft Dodger' Trump
The late New Orleans attorney, Jim Garrison, who probed the JFK assassination, said that the primary reason for his murder was that the president was working to end the Cold War with Russia. Kennedy was quietly using backchannels with Russian counterpart Nikita Krushchev to implement ambitious plans for nuclear weapons disarmament.

JFK had also flatly rejected secret proposals presented by the Pentagon for a pre-emptive nuclear strike on the Soviet Union. He was in addition closing down CIA-sponsored terrorist operations in Cuba and he had declared a withdrawal of US troops from the nascent Vietnam war.

In this way, Kennedy had entered the political kill zone, as far as the powerful, unelected Deep State was concerned. His policies were threatening huge vested interests of military manufacturers, Big Oil and Wall Street financiers. Hence, the CIA and its contract killers were deployed to eliminate the "problem".

Donald Trump shares two aspects with JFK. Like Kennedy, the business magnate is independently wealthy, which allows him to speak his mind without apparently having to ingratiate himself with powerful sponsors.

Secondly, and more importantly, Trump has repeatedly pitched his election platform against the relentless build up of the US-led NATO military alliance in Eastern Europe, as well as overseas deployment of American forces, and, in particular, Washington's policy of hostility towards Russia.

Trump has called for the normalization of relations with Russia. His foreign policy position is anathema to the Washington establishment which requires — as an absolute necessity — the demonization of foreign countries as "national security threats" in order to maintain the gargantuan US militarized economy. In short, the American Deep State thrives on continual war-making. War is a permanent function of bankrupt American capitalism.

This systemic dysfunction is what the Cold War with Russia was and continues to be about — the pumping of trillions of dollars into corporate and financial elites, who get away with the scam because of their lackeys among the political and media channels.

Anyone who defies these powerful American interests is liable for termination. They have entered the kill zone.

Trump's Proposed Supply-Side Reforms to Overhaul US Economy
Five decades after JFK, the US methods of political assassination have evolved to become more sophisticated. Character assassination may suffice most of the time. No need for contract hitmen or messy public enquiries. Media hitmen will do.

The target just needs to be placed in the crossfire of a media barrage, with no let up in negative shots.

Any foreign leader who likewise becomes a "problem" for US power interests is also targeted similarly. Russia's President Putin being perhaps the best example of this.

As the US presidential election approaches over the next three months, just watch how the shadowy powers in Washington mobilize to take Trump out of the race.

For taking out political enemies with extreme prejudice is the American way.