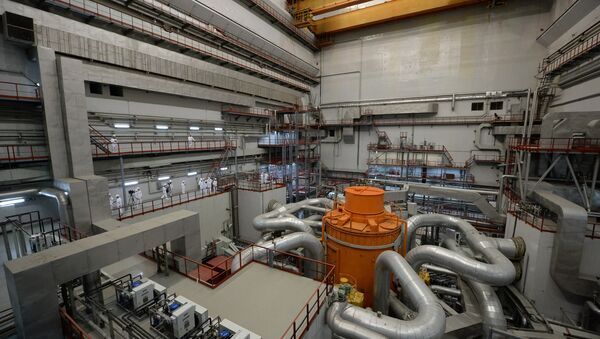 © Sputnik / Pavel Lisitsyn
/
Go to the photo bank
Subscribe
The Russian government approved on Tuesday plans to construct 11 new nuclear power reactors by 2030, including two commercial power units with fast-breeder BN-1200 reactors in the Urals and Russia’s first modern medium-capacity nuclear power reactor at the Kolskaya-2 nuclear power plant, it said in the decree published on its official website.

Russia plans to build one BN-1200 reactor at Beloyarsk NPP and the South Urals NPP.

Fast breeders, such as the cutting-edge BN-1200, a 1200-megawatt reactor, use a liquid metal heat-transfer agent as a coolant. Fast neutron reactors significantly minimize radioactive waste and expand the range of fuel used at nuclear power plants.

According to the experts, the fast reactors are most effective when used as part of a dual-component system combined with thermal neutron reactors and not on their own.

Rosatom Dismisses Rumors of Accident at Belarus' Nuclear Power Plant
In 2015, Russia launched a controlled nuclear fission at the Beloyarsk NPP BN-800 fast breeder reactor using a liquid metal heat-transfer agent as a coolant, which is considered a prototype of the BH-1200.

Also according to the plan, a nuclear power unit, comprising a facility to produce high-density uranium-plutonium neutron fuel and a fast neutron reactor with a closed on-site nuclear fuel cycle, called the BREST-OD-300, should be constructed by 2025. The power unit will be included in the Proryv (Breakthrough) project which is focused on developing technologies to close the fuel cycle.

Interest in small- and medium-capacity nuclear power reactors has increased in recent years and is driven both by a desire to reduce the impact of capital costs and to generate power away from large grid systems, especially in remote areas where it is difficult to deliver other types of fuel.

Cairo, Moscow Agree on Egypt's First Nuclear Power Plant Construction Terms
It was reported earlier that the Kola Peninsula was selected as the location of the new power reactor because major investment projects will be implemented in this territory.

According to the information provided by its developer Gidropress OKB, the WWER-TOI has a standard optimized and informatized design with the WWER reactor having an estimated output capacity of 1250 MW.

Two reactors are planned to be build at Smolensk NPP-2, Nizhny Novgorod NPP, Kostroma NPP and one at Tatar NPP.