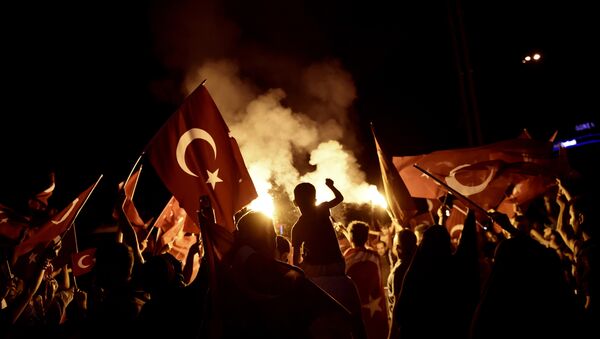 President Recep Tayyip Erdogan accused Western leaders of failing to provide Turkey the support it needed following the failed military coup and focusing instead on the purges. In an interview with Le Monde, he also said that Western leaders, unlike Russian President Vladimir Putin lacked "empathy" for Turkey.

Russia's reaction to the events that transpired on July 15 was markedly different from that of the West.

"When Mr. Putin called me to [express] his condolences, he didn't criticize me" for firing or detaining those suspected of being linked to the coup, Erdogan told the French daily. "All the Europeans asked me, 'why are so many soldiers detained, why have so many civil servants been dismissed?'"

For the Turkish president, this was testament to the fact that they did not understand the scale of what had happened in the country.

"Instead of showing empathy, Western leaders had the opposite reaction. This makes us sad and it is unacceptable," he noted, adding that their actions were inconsistent with the values they champion.

Erdogan also recalled how the world reacted to the deadly shooting at Charlie Hebdo's office in Paris in January 2015. Ahmet Davutoglu, who served as Turkey's prime minister at the time, along with other leaders took part in the solidarity march following the terrorist attack.

Cooperation of Russia, Turkey and Iran 'Would Help to Resolve Syrian Crisis'
"I wish world leaders had reacted in the same way to what happened in Turkey and that they wouldn't merely use a few clichés to denunciate the coup," he said.

On July 15, a group of military officers tried to overthrow Erdogan, but failed. More than 300 people were killed and more than 2,100 wounded in the chaotic events that saw coup plotters trying to seize key locations in Istanbul and Ankara.

More than 60,000 people were detained, fired or placed under investigation following the coup attempt.

"I asked President Obama to extradite Gülen. He asked me for documents and evidence. I pointed out to him that when the United States asked for terrorists to be extradited, we never asked for anything and just did it," the Turkish leader observed.

Russia and Turkey 'Will Resolve Syria's Problems' As Bilateral Ties Improve
Erdogan also said that Turkish authorities sent "85 crates of documents" on Gülen to the US.

As Turkey's relations with the West have deteriorated following the coup, Ankara's relationship with Moscow has improved. On August 9, Erdogan will visit Russia to meet with President Vladimir Putin in Saint Petersburg.

In his interview, the Turkish president described Russia as "both a European and an Asian country" that the West, unlike Turkey, had tried to isolate. He also said that the upcoming "meeting will mark a new step in the relations between our two countries."