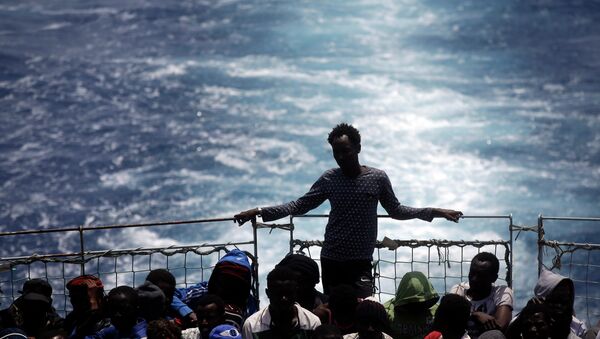 The Red Cross is launching this week its first search and rescue ship to save lives on the migration route in the Mediterranean Sea, the aid organization said Monday.

Red Cross Humanitarian Convoy Turned Away From Syria’s Darayya
MOSCOW (Sputnik) – The Responder rescue ship will patrol the central Mediterranean route from Africa to Italy, accounting for most deaths of migrants trying to reach Europe by sea, the Red Cross said in a press release. The Italian Red Cross (CRI), the International Federation of Red Cross (IFRC) and the Migrant Offshore Aid Station (MOAS) will partner for the mission.

"Too many, far too many children, women and men are drowning in the Mediterranean as they try to reach Europe in search of safety and dignity," IFRC Secretary General Elhadj As Sy said as quoted in the press release. "This is unacceptable, and we must stop it. This vessel is a buoy of hope that will save lives and alleviate human suffering."

The European Union is currently struggling to manage an enormous refugee crisis, with hundreds of thousands of people fleeing conflict-torn countries in the Middle East and North Africa. The majority of them try to reach relatively stable EU states by sea. More than 3,770 deaths of migrants trying to cross the Mediterranean Sea were recorded in 2015, according to the IOM.