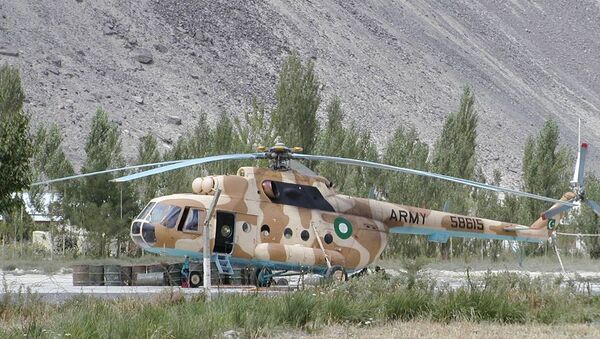 © Wikipedia
Subscribe
There is no threat to the lives of seven Mi-17 helicopter crew members who were taken hostage by Taliban, according to the Russian Foreign Ministry. Pakistan's Prime Minister Nawaz Sharif is personally supervising the release of the hostages.

MOSCOW (Sputnik) — The lives of seven Mi-17 helicopter crew members, including a Russian national, who have been taken hostage by Taliban fighters in Afghanistan, are not under threat, the Russian Foreign Ministry said Monday.

"There is no threat to the lives of hostages, talks on their release have been scheduled," the ministry said in a statement.

According to the statement, Pakistan's Prime Minister Nawaz Sharif, who is "personally supervising the release of hostages," has asked Afghanistan's President Ashraf Ghani and Commander of NATO 'Resolute Support' Mission in Afghanistan Gen. John Nicholson to provide assistance in release negotiations.

"A quick release of the Russian national remains our priority," the ministry stressed.

A Pakistani Mi-17 reportedly flew from Peshawar to Uzbekistan’s city of Bukhara for scheduled repairs when it crash-landed in Afghanistan last Thursday. Six Pakistanis and a Russian national were taken hostage by Taliban militants.