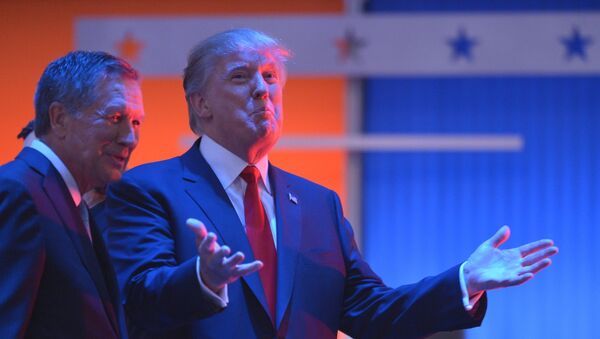 © AFP 2023 / MANDEL NGAN
Subscribe
International
India
Africa
The continued allegations show a brazen willingness on the part of the former Secretary of State to reignite the Cold War for the sake of securing a handful of extra votes through anti-Russian fear mongering.

On Friday, Hillary Clinton’s campaign released a disturbing new ad that blatantly accuses her political adversary of treason, the type of provocative behavior that is the hallmark of third-world authoritarians and is now the bedrock campaign message of the candidate favored to become America’s next president.

​The ad represents a stark departure from the most controlled political message of President Barack Obama’s 2012 campaign where he lambasted Republican opponent Mitt Romney for suggesting that Russia is the primary threat to America’s safety and stability saying "The 1980s are calling and they are asking for their foreign policy back."

However, in the wake of the recent WikiLeaks dump of 20,000 Democratic National Committee emails providing clear and compelling evidence that Hillary Clinton’s campaign engaged in a coordinated scheme with the Democratic Party and mainstream media outlets to sabotage Bernie Sanders’ insurgent progressive bid to upstage the Clinton coronation, Hillary’s team went on the offensive questioning and convoluting the source to make it appear as though it were the product of Russian intervention.

Clinton’s campaign manager Robby Mook was the first to float this conspiracy theory one would expect from a wrinkly ten-year-old James Patterson novel cast aside for its absurdity even in the realm of fiction, but the narrative caught steam quickly being employed by Clinton herself in a bevy of press hits.

The final shoe to drop was when ex-CIA chief, Michael J. Morell, best known previously as the mastermind behind the altered Benghazi talking points suggesting the attack was caused by a spontaneous protest rather than a coordinated act of war by al-Qaeda terrorists, took to the editorial pages of the New York Times to cast the utmost aspersion on Trump – "In the intelligence business, we would say that Mr. Putin had recruited Mr. Trump as an unwitting agent of the Russian Federation."

Joseph J. Welch famously remarked to Joseph McCarthy in response to the defamatory assault of his client as a foreign agent in an exchange that instantly ended the 1950s McCarthyism witch hunt: "Let us not assassinate this lad further. You’ve done enough. Have you no sense of decency?"

The answer provided from the Hillary campaign appears to be a resounding “no” based on the latest ad issued by the campaign.

"We don’t know why Trump praises Putin," starts the ad. It also says "we don’t know why" Putin praises Trump, why they share foreign policies, why Trump’s top advisers have ties to Putin, why Russia is trying to influence the election, how much Trump has invested in Russia, or what is going on here.

The ad closes simply with the line "We’ll let you guess" after smearing Trump’s character by insinuation and association in a fashion eerily similar to Joseph McCarthy’s grandstanding before attorney Joseph J. Welch finally stood up to the cruel tyranny of intimation.

Watch the clips of the Hillary ad and the McCarthy-Welch exchange for yourself. "We’ll let you guess" what Hillary’s campaign is up to.