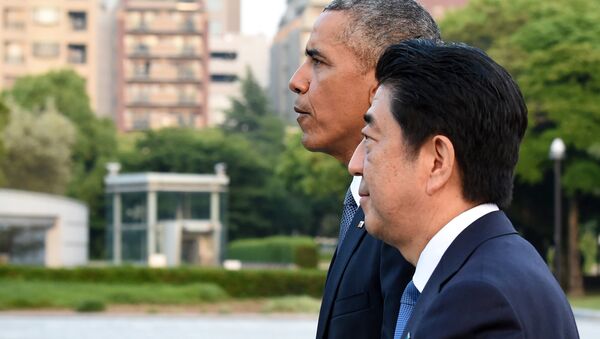 Japan strives to achieve global nuclear disarmament, a statement made on ceremony on the 71st anniversary of Hiroshima’s atomic bombing revealed.

"We will continue to make efforts toward a world without nuclear weapons," Abe said as quoted by the Asahi Shimbun newspaper.

Hiroshima’s Mayor Kazumi Matsui referred to the last year’s speech of US President Barack Obama, who also called on the world powers to pursue the world without nuclear weapons. Matsui said that it is necessary to take actions to save the world from the "absolute evil" of nuclear weapons.

The ceremony was held at the Hiroshima Peace Memorial Park and was attended by some 50,000 people from 91 countries.

In 1945, the United States dropped two atomic bombs on Hiroshima and Nagasaki, on August 6 and 9 respectively. The bombing in Hiroshima killed about 150,000 people, and the raid on Nagasaki claimed the lives of some 70,000 people. The bombings, along with successful Soviet operation against the Kwantung Army, accelerated surrender of Japan, which put an end to the World War II.