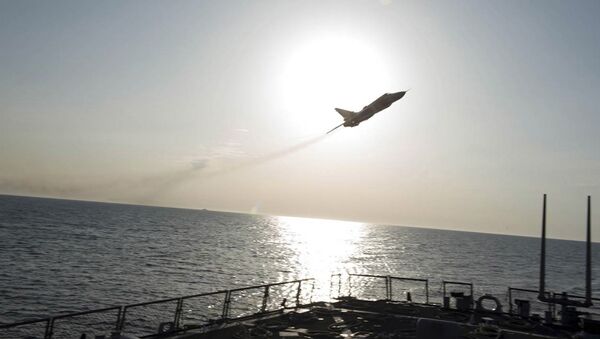 Russia’s Defense Ministry has offered NATO the chance to discuss terms for open interaction in the Baltic region to avoid any further security incidents in the area, but only on a quid-pro-quo basis.

Russia suggested notifying its neighbors of the scheduled military drills in the region and discussing the obligatory use of transponders, devices which emit an identifying signal in response to an interrogating received signal.

Russian military experts believe that the proposed moves will considerably ease the tensions in the skies above the Baltics which has recently witnessed considerable increase of combat aviation activities from both NATO and Russia.

Russia is ready to ensure transparency of its activities in the Baltic air but it asks for the same transparency from NATO, Sweden and Finland, whose Air Force has been increasingly active in the region since the start of the Ukrainian crisis, according to Russian newspaper Izvestiya.

Moscow has been increasingly wary of the British and American RC-135 reconnaissance aircraft flights over the Baltics with the turned off transponders.

NATO-Russia Council Gives Prospects For Agreement on Baltics Air Safety
Back in April an American RC-135U reconnaissance aircraft was buzzed by a Russian Sukhoi Su-27 fighter jet over the Baltic Sea near Russia’s Kaliningrad Region.

Pentagon then accused the Russian pilot of "coming dangerously close" to the US aircraft.

“When the flights are conducted with the turned on transponders, the systems of control over the airspace will constantly monitor the flight operation mode of any aircraft. This is our amicable suggestion and now it is up to NATO,” former Russian air force chief Petr Deinekin told the newspaper.

"Aside from the issue of transponders, the Russian Defense Ministry is proposing to discuss a wide range of issues, from interaction with NATO to the joint response to common challenges and threats,"Head of the Defense Ministry’s Main Directorate for International Military Cooperation Sergei Koshelev said on Friday.

The invitation was sent to the defense departments of these [Baltic] states, including the Lithuanian Defense Ministry. The Russian Defense Ministry expects the official response from our partners on the Russian proposals, as communication through the media will not allow us to rapidly resolve our differences," Koshelev added.

Head of the Department for European Security Studies in the Moscow-based Institute of Europe at the Russian Academy of Sciences Dmitry Danilov has explained why all the confidence-building measures in the Baltics should necessarily be reciprocal.

“Military threat in the region keeps growing and we need to take care of decreasing the risks, however it should be a reciprocal process without any unilateral concessions,” he told Izvestiya.

“It is a multilateral process and both Russia and its opponents are interested in it,” he said adding that the parties to the talks have been trying to agree upon the deterrent measures since last spring.

The political analyst hopes that there are grounds for the dialogue.