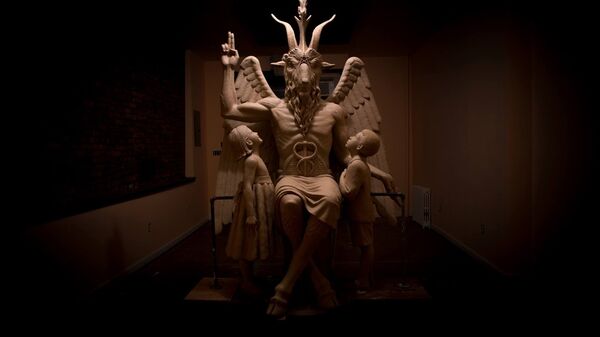 © The Satanic Temple Courtesy Photo
Subscribe
International
India
Africa
The Satanic Temple is seeking to create after-school programs for children in nine US school districts, to counter fundamentalist Christian options which they believe are a violation of laws governing the separation of church and state.

Is IRS Still Targeting Americans Based on Politics and Religion?
The same organization has previously attempted to have a statue of Satan installed on the grounds of two state capitols, in protest of other religious monuments.

Their efforts in Oklahoma, in response to a Ten Commandments monument, were successful: the state Supreme Court eventually banned all religious displays on capitol grounds, to avoid having to display an eight-foot bronze Satan.

The group has also previously attempted to lead so-called Satanic invocations at city council meetings, in protest of Christian prayers being used for the same purpose.

Now, the Temple has their sights set on the Child Evangelism Fellowship Good News Clubs, after-school programs that teach the Christian bible on public school grounds. The school districts targeted include those in the states of Utah, Georgia, California, Florida, Oregon, Washington state, Missouri, Maryland and Arizona.

First Church of Cannabis Files Paperwork with Indiana Secretary of State
Mat Staver, founder of a Christian legal aid group who has represented the Child Evangelism Fellowship, told the Guardian that his group believes the Satanic Temple is illegitimate, and is an “atheist group masquerading” as what he defines as a church.

Lucien Greaves, co-founder of the Satanic Temple, responded that members of his church “feel it provides everything a religion provides to be legitimized as such.”

Followers of the Satanic Temple are generally agnostic or atheist, and don’t believe an actual Satan exists, using the icon only as a symbol of rebellion. Members of the group are fierce proponents of freedom, “including the freedom to offend.”

Satanic Temple member and criminal lawyer Stu de Haan, who is involved in the Arizona effort, told Sputnik they are working on finding a sponsor to meet the guidelines for approval.

“Our current situation is that we are looking for a sponsor for the program as required by the school policy. If that becomes unfeasible, we will looking into challenging that policy,” de Haan said.

When asked whether the groups has a backup plan should the district deny them, de Haan observed that “they have no legal grounds to deny us.”

So far, the Granite school district in Utah has stated that if the Satanic Temple meets the requirements and pays rent, it will receive the same rights as the Christianity-based group.

Two other districts are reviewing requests.

Districts that do not comply could face expensive and lengthy legal battles if the temple challenges their decisions.