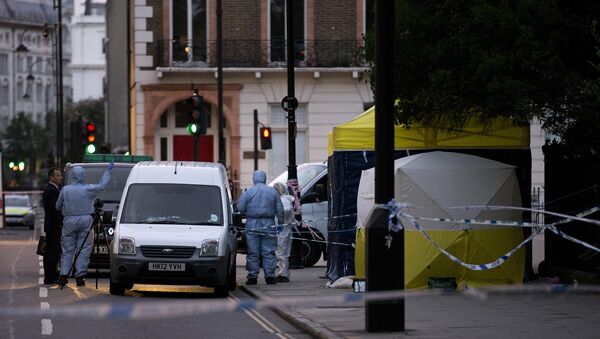 A 19-year old man has been arrested after the London knife attack and mental health can have played a role in the attack, police said.

MOSCOW (Sputnik) – The Wednesday night attack led to the death of a woman who was in her 60s, police confirmed. Five people were injured, their condition has not been specified. Initially, the metropolitan police said the wounded included four men and a woman, but later said, as cited by The Telegraph, that there are three men and two women.

"A 19-year-old man was arrested shortly after 10.39pm and is currently in police custody at hospital. Early indications suggest mental health is a significant factor in this case and that is one major line of inquiry. But of course at this stage we should keep an open mind regarding motive and consequently terrorism as a motivation remains but one line of inquiry for us to explore," the police said in a statement, as quoted by The Telegraph.

A man has been detained and arrested by police #RussellSquare https://t.co/jsPqqqeOJa

​According to police, the counterterrorism police are still involved in the investigation into the Wednesday night knife attack in central London, at Russell Square.

"As a precautionary measure tomorrow, Londoners will wake up and in the morning they will notice an increased police presence on the streets, including armed officers. This is there to provide reassurance and safety," police said.

Working closely with @CityPolice and @BTP to protect the public — you will see more armed officers across #London pic.twitter.com/YhSiNsyfXF