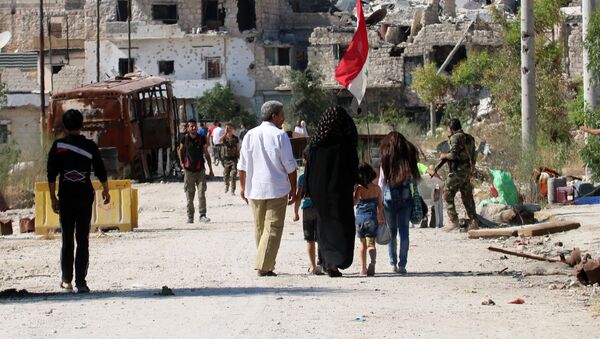 © AFP 2023 / GEORGE OURFALIAN
Subscribe
International
India
Africa
Belgium Foreign Minister Didier Reynders said Wednesday that further efforts to open humanitarian access to the contested Syrian city of Aleppo are needed, reiterating that a 48-hour humanitarian pause could only be a first step in this direction, the Belgium Foreign Ministry said in an official press release.

MOSCOW (Sputnik) — On Thursday, EU foreign affairs representative Federica Mogherini and humanitarian aid commissioner Christos Stylianides supported the call for a humanitarian pause in the fighting for Aleppo, originally proposed by the UN Office for the Coordination of Humanitarian Affairs (OCHA).

“Minister Reynders agrees with High Representative Mogherini that a humanitarian pause of 48h[ours] in Aleppo, as proposed by the OCHA, can only be a first step and that a further continuing opening of humanitarian access to Syria remains absolutely essential,” it was stated in the press release.

Since July 17, Aleppo has been the scene of fierce fighting with Syrian government troops encircling rebel-held areas and insurgents hitting back. All this time the sole supply road into the area had been closed.

"More than 300,000 people are under threat of being blocked from [accessing] humanitarian aid, which could lead to catastrophic consequences for the civilian population," the Belgium Foreign Ministry stated, adding that "the siege of civilians and the use of starvation as [a] weapon of war is contrary to international humanitarian law."

At the weekend, Moscow and Damascus commenced a large-scale humanitarian operation in Aleppo, opening escape routes for civilians and for militants wishing to lay down arms.