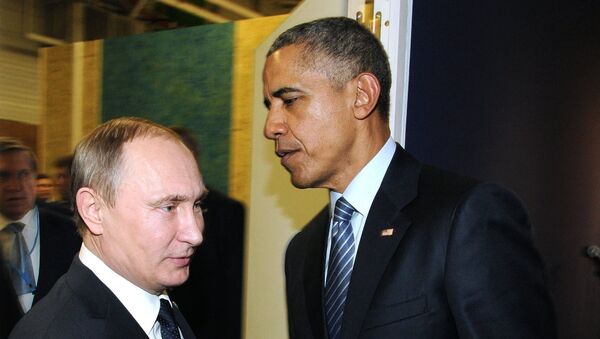 © Sputnik / Michael Klimentyev
/
Go to the photo bank
Subscribe
The leaders of Russia and the United States should issue a joint statement reaffirming their commitment to nuclear nonproliferation efforts, Executive Director of the Arms Control Association (ACA) Daryl Kimball told Sputnik, commenting on US plans to upgrade the B61-12 nuclear bomb.

MOSCOW (Sputnik) — On Monday, the US Department of Energy’s National Nuclear Security Administration (NNSA) authorized the bomb lifespan upgrade. The B61-12 is expected to be integrated with existing NATO forces and the F-35 aircraft in order to enhance NATO nuclear posture in Europe.

According to Kimball, US President Barack Obama and his successor, as well as Russian President Vladimir Putin, have a responsibility "to pull back from a nuclear action-reaction cycle," which, he said, put both countries at risk.

"To start, the two presidents should issue a joint statement reaffirming their understanding that there can be no winners in a nuclear war and that as long as each side has nuclear weapons, strategic stability will remain central to their bilateral relations," Kimball said.

He said that neither Russia nor the United States "should believe that it is possible to use nuclear weapons in a limited way as part of a conventional conflict."

Russia Not to Be Pulled Into an Arms Race Amid US Nuclear Arsenal Modernization
Both the United States and Russia are engaged in modernizing their nuclear arsenals, which have not been largely upgraded since the 1980s.

In 2010, Russia and the United States signed the New Strategic Arms Reduction Treaty (New START), which went into force in February the following year, to last until 2021.

Moscow has repeatedly said that it has no intention to expand its nuclear capabilities and has warned against US and NATO moves for such enhancements.