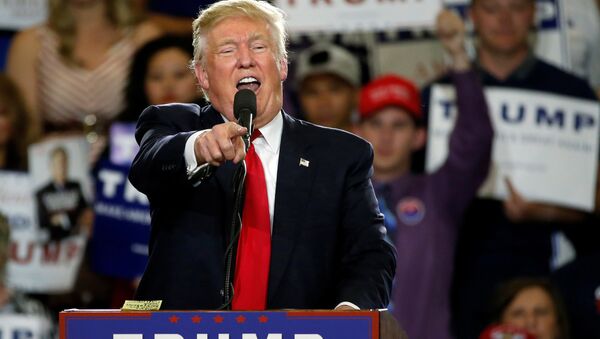 Former US Secretary of State Hillary Clinton is behind the talks with Iran that led to the transfer of $400 million to Tehran in exchange for the release of four US citizens, Republican presidential nominee Donald Trump said on Wednesday.

WASHINGTON (Sputnik) — The Wall Street Journal reported earlier in the day that the Obama administration secretly organized an airlift of $400 million worth of cash to Iran that coincided with the January release of four Americans detained in the country.

"Our incompetent Secretary of State, Hillary Clinton, was the one who started talks to give 400 million dollars, in cash, to Iran. Scandal!," Trump stated in a Twitter message.

World
US Secret Payment to Iran Could Be Ransom for Release of Four Nationals
According to the publication, wooden pallets stacked with euros, Swiss francs and other currencies were flown into Iran on an unmarked cargo plane, as the US law forbids transacting US dollars with Iran.

At the same time, the United States was negotiating a prisoner exchange with Tehran, raising doubts among Republicans that the money had changed hands to guarantee the release as a ransom payment.

On Wednesday, US State Department spokesman John Kirby denied the transfer to Iran.