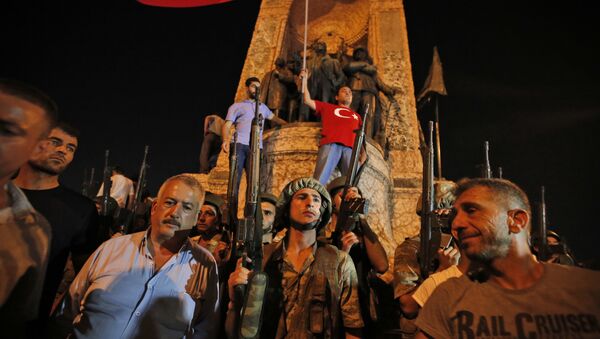 Voices continue to emerge claiming that the United Arab Emirates and Saudi Arabia could have supported the failed coup attempt in Turkey, citing Riyadh and Abu Dhabi's discontent with Ankara resuming ties with Tehran and Moscow.

There is still a lot of controversy surrounding the July 15 failed coup attempt in Turkey: voices continue to emerge claiming that the United Arab Emirates (UAE) and Saudi Arabia could have been behind the anti-government uprising.

Following the attempted coup Iran's Fars News Agency reported, citing Saudi whistle-blower Mujtahid, that the UAE leaders had allegedly "played a role" in the uprising while the House of Saud had been informed of the coup in Turkey before it erupted.

"There are reasons which show that given his intimate relations with Mohammad bin Zayed bin Sultan Al-Nahyan (the Crown Prince of Abu Dhabi and Deputy Supreme Commander of the UAE Armed Forces), Mohammad bin Salman [Deputy Crown Prince of Saudi Arabia] was aware of this coup," Mujtahid tweeted on July 17, as quoted by the media outlet.

'Foreign Powers' Behind Turkey Coup Attempt - Erdogan
Mujtahid, who is believed either to be a member of the House of Saud or to have a well-informed source in the royal family, also narrated that Turkish intelligence services had received information about the dubious collaboration between Mohammad bin Salman and Mohammad bin Zayed, but the Saudis convinced Turkey's Justice and Development Party (AKP) not to pay attention to this episode.

Meanwhile, on July 27 Al-Masdar News Agency broke that Qatari Defense Minister Khalid al-Attiyah, had obtained a confidential document that could prove that Riyadh and Abu Dhabi supported the failed coup in Turkey.

"This document reveals that a Saudi Emir and a top Emirati military official have been aware, in advance, of an imminent plot to topple the Turkish President through their participation in the Anatolian Eagle maneuvers held last May. However, they refrained from informing the Turkish authorities."

According to Al-Masdar, the document stated that the coup was due to be kicked off in August. However, it remains a secret why the coup attempt was launched in mid-July.

"Saudi Arabia and Turkey disagree on different matters including the Kurdish issue and the Iraqi disputed city of Mosul. Furthermore, the recent thaw between Turkey and Russia following the apology phone call made by Erdogan has apparently become a great matter of concern for Saudi and UAE authorities," the media outlet suggested.

CIA Behind Failed Coup Attempt in Turkey - Ex-Turkish Chief of Staff
However, on July 28 Qatar's Ministry of Defense denied media reports that Khalid al-Attiyah accused Riyadh and Abu Dhabi of supporting the coup and labeled the tweet as fabricated.

"The Directorate of Protocol, Public Relations and Moral Guidance at the Ministry of Defense has denied reports by some media about the fabricated tweet against the Kingdom of Saudi Arabia and the UAE, which was attributed to Minister of State for Defense Affairs Dr. Khalid bin Mohammad Al Attiyah, regarding recent events in the Republic of Turkey," Qatar News Agency reported Sunday. 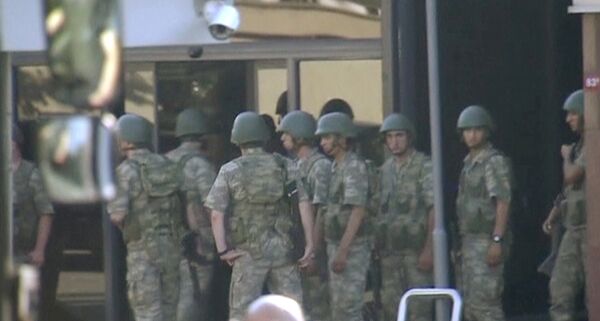 still image from video shows armed soldiers waiting at the entrance of TRT state television as they prepare to surrender to the police after a failed coup attempt, in Istanbul, Turkey July 16, 2016
© REUTERS / Reuters TV

"When a Saudi newspaper owned by the son of the king attacks Erdogan, it is a symptom of the swiftly deteriorating relationship between Saudi Arabia and Turkey. Furthermore, this deterioration is largely due to the improving relations between Turkey and Iran. This is a significant shift in Middle Eastern politics and will have significant implications, not least for Islamic State and the conflicts in Syria and Iraq," Ian Greenhalgh of Veterans Today commented on the matter.

Hearst revealed that Dahlan had certain ties to Turkish cleric Fetullah Gulen, an alleged mastermind behind the failed coup attempt.

"Dahlan is alleged to have transferred money to the plotters in Turkey in the weeks before the coup attempt and to have communicated with Fethullah Gulen, the cleric alleged by Turkey to have masterminded the plot, via a Palestinian businessman based in the US. The identity of this man, who is close to Dahlan, is known to a Turkish intelligence service," the journalist underscored.

Hearst called attention to the fact that in the course of the coup attempt pan-Arab media based in Dubai reported that the uprising against Erdogan and the ruling party had been successful. Only 16 hours later did the government of the UAE condemn the coup.

According to Hearst, the UAE leadership is fearful of backlash from Ankara.

"They [UAE] now feel that Erdogan is in full power. They do not like him personally and think of him as a man who will seek to take revenge. Once Erdogan has cleaned out the stables, they think he will then turn on those outside the country who supported the coup," a source with the knowledge of the matter told the journalist.