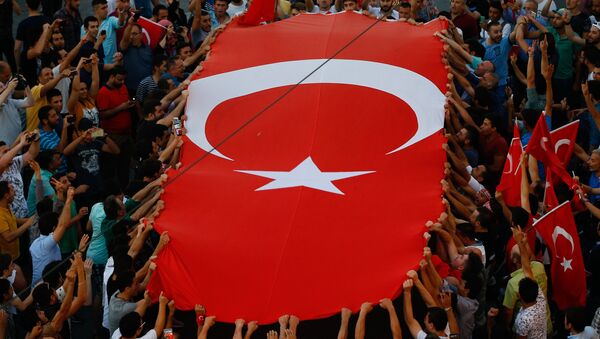 © AP Photo / AP
Subscribe
Why did the recent coup attempt in Turkey fall through? How will this impact Turkey’s relations with other countries? Sputnik discussed these and other questions with Mayu Kaneko, a Turkish-affairs expert at the Middle East Institute of Japan.

Speaking about the reasons for last month’s coup attempt  Mayu Kaneko said that it reflected the Turkish military’s opposition to the policies of President Erdogan’s ruling Justice and Development party.

“After coming to power in 2002 the Justice and Development party, led by President Erdogan, started to sideline the army and make it weaker. The conflict between Turkey’s traditional secularist course and the Islamists has been heating up ever since The army, this traditional symbol of secularism, has all along been wary  of Erdogan’s dictatorial ways and the attempted coup we saw last month only demonstrated this,” Mayu Kaneko said.

She mentioned two reasons why the coup failed. First, it was not a case of the entire Turkish army rising against Erdogan. It was apparently initiated by those in the Air Force, while the ground forces, the Navy and police remained loyal to the regime.

Turkey Attempted Coup Points to Deep Contradictions Within Society, Army
The military chief of staff and the ground forces commander didn’t take part in the coup attempt and was quickly arrested. Secondly, the overwhelming majority of Turks did not support the putschists.

Since modern Turkey was founded in 1923, the military, long seen as the guardian of the secular system established by Mustafa Kemal Ataturk, has staged several coups to prevent an Islamist comeback.

“In 1960 and 1980 all  branches of the Turkish military – the ground force, the Navy and the Air Force —  acted as one, but the situation in the country has changed radically ever since,” Mayo Kaneko noted.

She added that many of those who responded to President Erdogan’s call to take to the streets and thwart the coup hated Erdogan but at the very same time, were against a military overthrow of the government.

President Erdogan believes that Fethullah Gulen, an Islamist preacher currently living in exile in the US, was behind the failed coup. On July 19 Turkish Prime Minister Binali Yildirim said that he had requested the extradition of Gulen.

“The Americans argue that they can’t extradite Gulen as long as there is no hard proof  of his alleged role in the coup attempt. This could undermine the efficiency of the US military campaign against Daesh as the Americans widely use Turkish military airfields to strike terrorist targets in Syria and Iraq,” Mayu Kaneko continued.

She also mentioned the problem of Kurds and the Kurdistan Workers’ party (PKK) Ankara has been fighting for so many years now.

Meanwhile, in its struggle against Daesh, Washington supports the Kurdish self-defense forces which are taking orders from the PKK.

“We should also keep a close eye on the presidential elections in the United States. If Donald Trump is elected, America could take a tougher stand against Ankara and relations between the two could deteriorate. Meantime, after Erdogan apologized for last year’s downing of a Russian bomber in Syria, relations between Turkey and Russia are now looking up,” Mayu Kaneko said.

“The mere fact that President Erdogan was the first to try to mend fences with Russia means that he is seriously worried about the situation in  Turkey, which has been hit by a rash or terrorist attacks staged by Daesh and the PKK.”

Mayo Kaneko also said that fully aware of US and European worries about his crackdown of free speech and his authoritarian methods, President Erdogan is trying hard to restore good relations with Moscow as Turkey is still hurting from the devastating effect the dramatic drop in the number of  Russian tourists has had on the Turkish economy.

As for Japan’s policy towards Turkey, mayo Kaneko said that unlike the US which is critical of Erdogan, Tokyo is simply watching the progress of the ongoing investigation of last month’s coup attempt in Turkey.

“Turkey has traditionally been friendly towards Japan  and Prime Minister Shinzo Abe is good friends with President Erdogan. Last month’s coup attempt has had little effect on the major Japanese companies doing business with Turkey. And still, after all that happened during and after that coup attempt many in Japan now see Turkey as a dangerous country,” Mayu Kaneko said in conclusion.

000000
Popular comments
What a shallow analysis by Mr.Mayu Kaneko. First of all, the coup has in fact not executed by the secularist or kemalists. This is a propagandist western view of point or namely a disinformation to say the least. I am following Turkish news channels and many secularist/kemalist soldiers (ex colonels/generals) who were put into prison 3-4 years ago by the gulenis judges are saying that the putschist are the ones that they themselves have identified years ago. I personally really don't need more proof than these statements. These people have spent years in prison and have absolutely no gain by lying. At the same time, there are bunch of other evidence (no space to mention here), which confirm without any shred of doubt that the attempted coup was indeed planned by the US and executed by the Gulenist forces in the military.
Alan H
2 August 2016, 21:12 GMT
000000
Newsfeed
0
New firstOld first
loader
LIVE
Заголовок открываемого материала
Access to the chat has been blocked for violating the rules . You will be able to participate again through:∞. If you do not agree with the blocking, please use the feedback form
The discussion is closed. You can participate in the discussion within 24 hours after the publication of the article.
To participate in the discussion
log in or register
loader
Chats
Заголовок открываемого материала
Worldwide
InternationalEnglishEnglishMundoEspañolSpanish
Europe
DeutschlandDeutschGermanFranceFrançaisFrenchΕλλάδαΕλληνικάGreekItaliaItalianoItalianČeská republikaČeštinaCzechPolskaPolskiPolishСрбиjаСрпскиSerbianLatvijaLatviešuLatvianLietuvaLietuviųLithuanianMoldovaMoldoveneascăMoldavianБеларусьБеларускiBelarusian
Transcaucasia
ԱրմենիաՀայերենArmenianАҧсныАҧсышәалаAbkhazХуссар ИрыстонИронауОssetianსაქართველოქართულიGeorgianAzərbaycanАzərbaycancaAzerbaijani
Middle East
Sputnik عربيArabicArabicTürkiyeTürkçeTurkishSputnik ایرانPersianPersianSputnik افغانستانDariDari
Central Asia
ҚазақстанҚазақ тіліKazakhКыргызстанКыргызчаKyrgyzOʻzbekistonЎзбекчаUzbekТоҷикистонТоҷикӣTajik
East & Southeast Asia
Việt NamTiếng ViệtVietnamese日本日本語Japanese中国中文Chinese
South America
BrasilPortuguêsPortuguese
NewsfeedBreaking
11:36 GMTNew Zealand Deploys Naval Ship as Malaita Province Leader Seeks Independence from Solomon Islands
11:36 GMTUK House of Commons Discusses the 'Nationality and Borders Bill'
11:32 GMTWSJ Report on China’s Military Base on Africa’s Atlantic Coast ‘Not True' - Chinese Military Expert
11:31 GMTMinneapolis Man Arrested After Trying to 'Intimidate' Judge in Kim Potter Trial
11:14 GMTTrump's Oxygen Levels Fell 'Dangerously Low' During His Bout With COVID-19, Meadows Claims in Book
11:13 GMTChina’s Type 055 Destroyer Holds Anti-Submarine Drills Amid US Threats
11:09 GMTSouth Korea Backs Beijing Winter Olympic Games Despite US Boycott
11:04 GMTTrump Berates 'Corrupt News' Over Allegations He Was COVID-Positive Ahead of 2020 Debate With Biden
10:55 GMTLive Updates: Vladimir Putin and Joe Biden Hold Talks Amid Growing Tensions
10:52 GMTKremlin: US Decision on Beijing Olympics Can Hardly Be Called Boycott
10:45 GMTScientists Apply 'Immortality Mushroom' to Synthesise Nanogold
10:14 GMT'Blink Twice': Kamala Harris Aide 'Absolutely Loves' His Job, But Netizens Don't Buy It
10:09 GMTNovak Djokovic Signs Up for ATP Cup Amid Row Over Tennis Star's Vaccination Status
10:00 GMT'I Would Like Messi to Be Sincere': Robert Lewandowski Blasts PSG Star's Ballon d'Or Remarks
09:46 GMTPentagon Chief Concerned Over Americans' Declining Trust in US Military Under Biden
09:23 GMTCar Bomb Explosion in Southern Iraq Reportedly Kills 7 People - Video, Photo
09:14 GMTPalestinian Activist Adopts Recycling & Mass Education as PA Struggles to Cope With Piles of Waste
09:08 GMT'It's a Signal to Washington', Say Experts as India Expands Military Ties With Russia
08:58 GMTRussia Approves Flight of Two Japanese Tourists to ISS, Marking Return to Space Tourism
08:48 GMTAstroworld Tragedy: Travis Scott Asks Judge to Dismiss at Least One of 300 Lawsuits Against Him