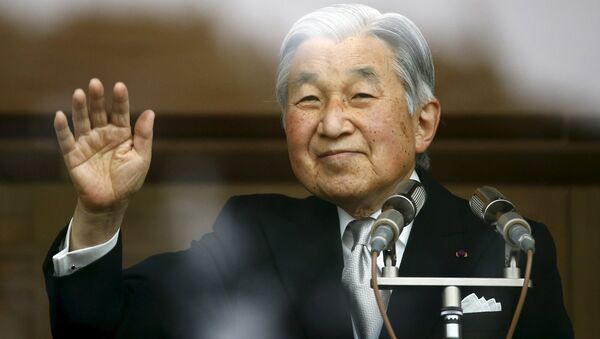 Even though initial media reports said that an official statement to this effect was not expected before December, a few days ago the major newspapers, Yomiuri and Nikkei, wrote that the 82-year-old Emperor was considering a televised address to the nation on August 8.

Meanwhile, the Imperial Household Law may have to be revised to allow the abdication to take place, and this would also require parliamentary approval.

“I think that the Emperor is acting in the best interest of his country and his own health after he admitted that he was no longer able to properly execute his duties as the symbol of the state and national unity,” Valery Kistanov he said.

He added that although the Emperor is a ceremonial figure in Japan's constitutional monarchy, he still has to fulfill a number of official duties, meeting with foreign diplomats, accepting foreign ambassadors’ credentials and paying visits abroad.

“All these duties are a bit too much for an 82-year-old man who has undergone two serious operations. I think that his decision has been dictated by a desire to make a graceful exit and not be seen as a “doddering” symbol,” Kistanov added.

In a recent Nikkei poll 77 percent of respondents supported the idea of a system of lifetime imperial abdications.

Emperor Akihito was the first member of the Imperial Family of Japan to marry a commoner in defiance of centuries-old tradition.

During the devastating earthquake of 2011, Emperor Akihito, strongly advised by his entourage to leave Tokyo, decided to stay in the capital and, in an unprecedented address to the nation, urged his countrymen to be strong and hold out.

His father, Emperor Hirohito, gave up his status as a “Living  God” on August 15, 1946 and Emperor Akihito is now trying to  prove that being emperor is not a mere function, that he is a human being entitled to a peaceful retirement and the right to live his life the way he deems fit.

Many political commentators have been quick to explain the Emperor’s upcoming exit by widespread expectations that Prime Minister Shinzo Abe, whose party garnered over two-thirds of parliamentary seats during the recent elections, could review the country’s pacifist constitution and make Japan a constitutional monarchy, rather than a parliamentary republic which it is now.