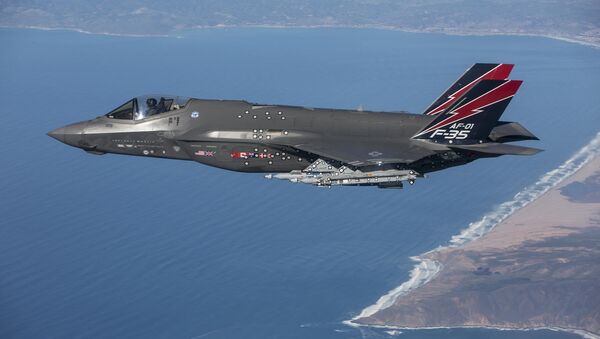 © Flickr / Airman Magazine
Subscribe
In the lead up to being declared combat ready, the US Air Force carried out a “kill” test with the fifth-generation fighter against a UAV.

After hinting last week that the troubled, $1 trillion fighter jet could soon be deemed combat worthy, developer Lockheed Martin made the official announcement on Tuesday.

"With the F-35A, the Air Force now has a fighter combining next-generation radar-evading stealth, supersonic speed, fighter agility and advanced logistical support with the most powerful and comprehensive integrated sensor package of any fighter aircraft in history," the defense giant said in a statement.

The jet had to pass a number of tests in the last few days, including one along the California coast involving a drone and an AIM-9X Sidewinder missile.

"After launch, the missile successfully acquired the target and followed an intercept flight profile before destroying the drone, achieving the first F-35 Air-to-Air kill or 'Boola Boola,' which is the traditional radio call made when a pilot shoots down a drone," officials said in a press release, according to DoD Buzz.

The F-35 taking part in the test was able to track and target the drone with its onboard sensors. The pilot, Maj. Raven LeClair, was able to coordinate the targeting data using the jet’s state-of-the-art helmet-mounted display.

"It’s been said you don’t really have a fighter until you can actually hit a target and we crossed that threshold with the first air-to-air weapon delivery of an AIM-9X. This successful test demonstrates the combat capability the F-35 will bring to the US Military and our allies," the pilot said in a statement.

"This test represents the culmination of many years of careful planning by combined government and contractor teams. We want to operators will receive the combat capability they need to execute their mission and return home safely – we cannot compromise or falter in delivering this capability."

While the air-to-air tests appear to have been successful, the Air Force has had trouble with is evasion of surface-to-air missile tests, claiming that the plane’s stealth is simply too good.

"If they never saw us, they couldn’t target us," said. Lt. Col. George Watkins, according to Defense News, explaining that the drills could only be carried out after pilots switched on their transponders.

The F-35, the most expensive weapons system ever built, has suffered dozens of setbacks throughout its production. In addition to flight performance tests that show the fifth-generation fighter is outperformed by older aircraft, the F-35 has also experienced technical errors that could put the pilot’s life at risk, including a faulty ejection seat.

With the F-35A approved, the Pentagon is still waiting on the Marine Corps’ F-35B variant and the US Navy’s F-35C model.