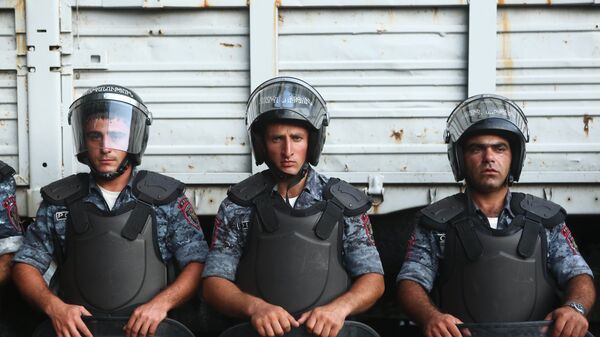 YEREVAN (Sputnik) — On Sunday, Armenian security forces said that the police building in Yerevan's Erebuni district, which had been seized by an armed group, was liberated with 20 militants arrested. Several people were injured in a shootout during the operation.

"Three members of the armed group are inside our medical center," the center said in a press statement.

The names of those hospitalized have not been disclosed.

Armenian Police Say Detained Over 160 People Amid Unrest in Yerevan
Earlier in the day, one of the leaders of the armed group, Varuzhan Avetisyan, said that the militants had decided to surrender, citing an intention to spare innocent lives.

The police station in the Armenian capital's Erebuni district was held by the armed group since July 17, when several traffic police officers were taken hostage inside the building. A policeman was killed and six more people were injured, including five police officers. The group released all hostages by July 23.

The group demanded the resignation of Armenian President Serzh Sargsyan and liberation of Jirair Sefilian, an opposition politician and founder of the New Armenia Public Salvation Front arrested over illegal arms storage. A number of rallies were held in Yerevan in support of the armed group, resulting in clashes with police and over a hundred arrests.