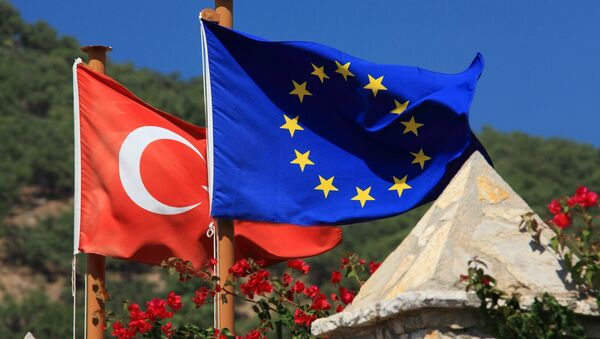 WASHINGTON (Sputnik) – The post-coup type of relationship between military and civilian leaders in Turkey is what Brussels wanted to see to consider the country for EU membership, former NATO commander Wesley Clark told Sputnik.

"The way it works now [after the July 15 coup attempt] is that Turkey is more like a regular government where the military is loyal to civilian authority. That’s what we wanted and European Union wanted for Turkish consideration of EU membership," Clark said.

On Friday, Turkish Agriculture Minister Faruk Celik told Sputnik Ankara is disappointed over the ambiguous attitude of some EU member states to the attempted coup in Turkey, coming a day after German Chancellor Angela Merkel said Erdogan’s harsh post-mutiny crackdown has been disproportionate.

Turkey Says FBI and CIA Behind Failed Coup, Gulen 'Only a Pawn'
Turkey signed an association agreement with the then-European Community in 1963, and submitted a membership application in 1987. Talks about Ankara's membership to the European Union began in 2005. The Cyprus dispute and Turkey's record of denying press freedom are among the major issues obstructing Turkey's accession to the bloc.

The July 15 botched coup attempt by sections of the Turkish military to remove Recep Tayyip Erdogan’s government has resulted in the detention of thousands of senior and junior military officers critical of the elected government.

Erdogan has long been suspicious of a "deep state" in Turkey composed of conspirators from the military, intelligence and judicial departments and has previously sought powers to uproot them, according to Turkish media reports.