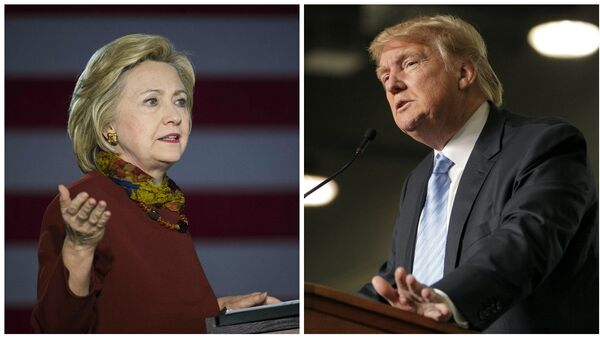 Donald Trump’s increasingly pro-Russian tilt apparently clashes with Hillary Clinton’s toughening rhetoric against Moscow. Some political analysts on both sides of the Atlantic believe this could deepen the rift between America and Russia once the current presidential race in the US is finally over, Gazeta.ru wrote.

Only 9% of US Citizens Choose Trump, Clinton as Presidential Candidates
By playing “the Russian card” the Republican presidential hopeful has managed to stay in the media limelight as his Democratic nemesis starts to dominate America’s political agenda.

Late last month Donald Trump said he would consider recognizing Crimea as part of Russia and lifting sanctions against Moscow. Just a few days later Trump said that the people of Crimea preferred to stay with Russia instead of Ukraine.

He also urged Russia to hack Hillary Clinton and release her personal emails.

“Russia, if you're listening, I hope you’re able to find the 30,000 emails that are missing” he told a news conference in Florida in a clear reference to the emails Hillary Clinton had sent to the State Department.

Trump’s recent declarations about “Russian hackers” and Crimea coincided with the Democratic Party’s Convention in Pennsylvania where Hillary Clinton was named the Democratic candidate for President.

Is Trump Trying to Prevent a New Cold War?
All this looks more like a PR stunt meant to say that even though Trump is not in love with Russia, he realizes that relations with Moscow are a hot potato issue.

Each time he sees that he is losing out the media war against Clinton, Trump starts making provocative statements about Russia just to win public attention.

As for Hillary Clinton, she could start playing the anti-Russian card to enlist the support of radical liberals and even some Neocons who don’t like Trump.

While Donald Trump appears to be willing to mend fences with Russia, Hillary Clinton wants to underscore her opposition to this line by ramping up the Americans’ anti-Russian sentiment, which is a dangerous way to go.

“Clinton is now taking on board people who want to bring back the Cold War days,” Mathew Barrows, a leading analyst at the Atlantic Council expert center in Washington, told the newspaper.

He added that Hillary Clinton’s policy towards Russia could become even tougher and feared that she could authorize the delivery of lethal weapons to Ukraine.

Trump Says He Will No Longer Be 'Nice' to Hillary Clinton
Looking on the bright side, Hillary Clinton still has one potent means of mending fences with Moscow and this is none other than her husband Bill who is relatively chummy with Vladimir Putin and many in the Russian political elite. The resource is very likely to come in handy if the former First Lady is elected in November.

“Bill Clinton will step in when [US and Russia] feel the need for informal relations between them,” Gazeta.ru wrote quoting a former White House official.

Meanwhile, Hillary Clinton maintains her lead over Donald Trump in a Reuters/Ipsos opinion poll released on Saturday, which showed that 40.5 percent of likely voters supported the Democratic hopeful, while 34.6 percent backed Trump.