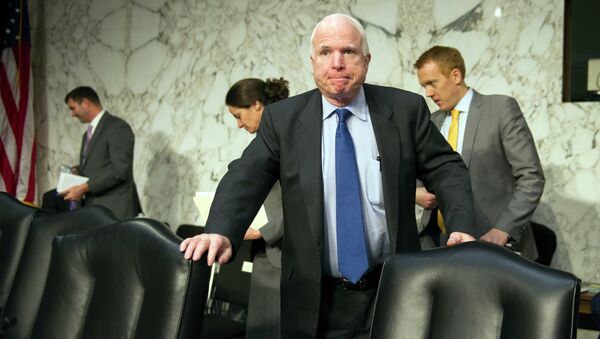 © AP Photo / Cliff Owen
Subscribe
US Senator John McCain is going to face the toughest reelection in his career, with his approval rating hitting rock bottom. McCain has endorsed Donald Trump as a party candidate, yet he has to win over the Latino minority. Will he ever be able to survive 2016?

McCain has to win over Arizona if he is to stay in the Senate. That would be a tough aim, since his support has cratered to 30%, with 54% of voters opposing the candidate, according to a June survey by liberal pollster Public Policy Polling (PPP). If McCain is going to keep his seat, he will need every single voter he can get, so how will he do it?

Arizona's electorate has a significant Latino share — some 30% of the state's population according to the 2010 census. This is a significant number of voters, yet McCain has endorsed Donald Trump, known for his brash anti-immigrant rhetoric, as his party's presidential nominee.

He did it despite Donald Trump openly questioning his status as a war hero. McCain-who skipped the GOP convention this month to campaign-has said Trump espouses "uninformed and indeed dangerous statements on national security," and that he "strongly" disagrees with him on some issues.

So why would he do that? Oh, there's a reason, for that, as explained by Arizona-based pollster Michael O'Neil, who co-hosts KTAR Phoenix's radio show, "The Think Tank." O'Neil says that there is a significant share of Tea-Party voters, akin to Europe's far-right, who would "love" to say McCain is Hillary Clinton's ally.

And there are the 47% of Republican voters who brought victory to Donald Trump, endorsed even by former Arizona Governor Jan Brewer, in the state's March GOP primary.

Losing the support (or gaining a furious anti-support) of the far-right would drown McCain in his Republican primary contest against Kelli Ward, a former Arizona senator, who secured an endorsement from the Tea-Party support. Thus, McCain can't afford to criticize Donald Trump until he gets past Kelli Ward.

"He hasn't gone any further than that for fear of infuriating the Tea Party or far-right, who would just love to say he's an ally of Hillary and is therefore the devil incarnate. If he gets through the primary, after the primary, I expect him to distance himself further from Trump," O'Neil said.

But beating Kelli Ward won't be enough. He will also have to get past Ann Kirkpatrick (D-AZ), whom he leads by only 2 per cent (42% to 40%, as of June 2016 PPP poll). And Kirkpatrick's campaign is definitely not going to sit there and watch.

According to Kirkpatrick's campaign manager Max Croes, part of the strategy is to try and show that McCain is not the same maverick he once was. The campaign has already released an ad tying McCain to Trump (McCain was in support of building a fence on the US-Mexico border back in 2010, his campaign even releasing a "Complete the Danged Fence" ad).

So McCain is now between a rock and a hard place. He'll have to do the impossible if he hopes to survive in 2016: he'll have to work to hold onto Trump's base and at the same time somehow manage not to offend Latino and independent supporters. What's on his side is high name recognition rating and money. TPM says the candidate's campaign warchest is some $5.5 million compared to Kirkpatrick's $1.3 million, which McCain could put to good use, if only he can figure out how to.