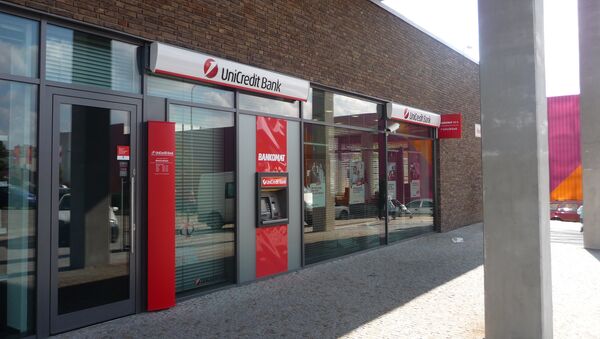 © Photo : Pavel Ševela / Wikimedia Commons
Subscribe
A stress test conducted a few days ago by the European Banking Authority confirmed the poor condition of many credit institutions in Europe. Italian banks and Germany’s Deutsche Bank are doing the worst.

Turkish Minister Says Economy in Good Condition Following Coup Attempt
In recent months, Deutsche Bank shares have lost 25% of their value, French bank Société Générale — 23%, and Italian giant UniCredit — almost 30%. According to Société Générale's Chairman of the Board Lorenzo Bini Smaghi, the entire financial system of the Eurozone is under great pressure.

The problems in the European banking sector have accumulated over a long period of time; the Brexit referendum gave another powerful impulse, said RIA Novosti analyst Dmitry Dobrov. The referendum sowed panic among foreign investors and undermined confidence in the financial markets. Under these conditions, investors are afraid to invest money in all countries with weak economies, including Italy. That is why Italian banks were affected by the crisis in the first place.

The Italian banking sector has about 360 billion euros of "bad" shares, which is about 20% of the total loan portfolio. About 200 billion euros of those are "irretrievably bad," said Dobrov. The course of shares of Italian banks has fallen by more than half since the beginning of the year, and this aggravates the situation even more.

The collapse of one bank may lead to a chain reaction that would have catastrophic financial and political consequences, not only for Italy but also all over Europe.

IMF Releases Damning Report on Failures of Greek Bailout Deals
According to data of the Bank for International Settlements (BIS), Italian banks have approximately 550 billion euros of loans from around the world, including 250 billion euros from French banks and 90 billion from German ones. In the event of a collapse of the Italian banking sector, Deutsche Bank alone would lose 30 times more than if Greece went bankrupt.

The government of Matteo Renzi seeks a review of Eurozone banking regulations in order to direct the taxpayers' money to save the bank. Renzi cannot allow depreciation or curtailment of bank deposits of Italians — and that is exactly what the new EU financial rules provide.

According to Dobrov, this action could lead to panic: investors will withdraw funds en masse from banks, and this will lead to a total collapse of the financial system. In the event of mass protests, early elections will be appointed, which could end in Italy's anti-European party coming to power.

Renzi Rules Out UK’s Access to EU Single Market if Borders Stay Shut
German Chancellor Angela Merkel stands categorically against Renzi's plans. Merkel says she does not intend to change the rules "every two years." Renzi, apparently, is ready to go to the end.

German and French bankers are supporting Renzi: the government must participate in rescuing the bank. According to a leading economist at Deutsche Bank, help in the amount of 150 billion euros from the European Central Bank could save the situation. It would plug the holes in the European banking system, especially in Italy.

This action would allow the attraction of public funds as an exceptional measure, though in violation of EU banking rules. This refers to the common European solution that in the event of a bank's collapse the responsibility falls on its shareholders and investors, not taxpayers (or the state). But now banks demand the state to pay as well.

The Reaction of Germany and the IMF

Germany and its ruling parties are strongly opposed to Renzi's plans to use public money to rescue Italian banks. They called the Italian government's plans "unacceptable" and accused it of not planning accordingly after the negative bank stress tests in 2014. Such decision jeopardizes the stability of the whole monetary union, they continued.

IMF Fails to Foresee Magnitude of Risks in Three European States
According to the decisions taken by the EU after the crisis of 2008-2009, public funds cannot be used to rescue banks. Shareholders, private investors and bondholders are the ones who must pay. In Brussels, the president of the Eurogroup, Jeroen Dijsselbloem, said the new aid package for Italy will not happen.

Meanwhile, the IMF, which fears the crisis could spread to other euro zone countries, took on the side of Renzi. The Fund urged Rome to reorganize its banks as soon as possible. In its statement, the IMF stated that "the reform of the Italian financial sector is crucial for the recovery of the Eurozone's stability."

Now the Italian government is holding tough negotiations with Brussels and Frankfurt. There have been signals that the European Central Bank could provide some assistance on the condition that bank investors allocate money as well; but there is no single word on state support. A compromise on the Greek scenario is not ruled out, too, Dmitry Dobrov said. The state could be allowed to buy back shares of Monte dei Paschi, but the European Commission in response will force investors to sell a share of their bank assets and conduct layoffs. At the same time, investors will lose some money, but the financial collapse can be avoided. But for how long?

Italy in the Economic Impasse

The nature of Italy's problems is structural, the analyst said. After many years of recession, economic growth did not come to this country; growth forecasts are reduced to 0.8% this year and 0.6% next year.

Renzi Slammed for 'Selling Himself to US' by Extending Russia Sanctions
Since 2008, Italy's economic indicators have deteriorated sharply, and industrial production reduced by 25%. According to the rating of the World Economic Forum (WEF), Italy takes the 43rd place in the world in terms of competitiveness. Transparency International has put Italy in 61st place out of 167 countries in terms of the level of public corruption, following Greece, Romania and Georgia. With such prospects against the backdrop of rising unemployment, more factors indicate that the "doubtful" loans will never be repaid.

A large part of the problems are associated with too "hard" European currency. To compensate the limitations associated with the euro, the government, instead of devaluation, is constantly increasing debt in an attempt to boost economic activity. The anti-Russian EU sanctions are also playing a negative role, resulting in Italy's loss of this extremely important market.

Matteo Renzi's government has started to carry out economic reforms, but they have not been developed properly; the country cannot crawl out of recession, the expert stated. Observers believe that if Renzi does not solve the financial crisis by October, he should resign.

000000
Popular comments
I am sure all banks will be rescued by taxes. And a more European citizens will be send to poverty. What happens to Greece was a warning example but European apocalypse will hit the whole normal population. And then we will nneed a Putin to save us. I may be very pessimistic but among European "elites" who won't find such a personality.
kooka
1 August 2016, 20:29 GMT
000000
print more cash....
Thor
1 August 2016, 20:38 GMT
000000
Newsfeed
0
New firstOld first
loader
LIVE
Заголовок открываемого материала
Access to the chat has been blocked for violating the rules . You will be able to participate again through:∞. If you do not agree with the blocking, please use the feedback form
The discussion is closed. You can participate in the discussion within 24 hours after the publication of the article.
To participate in the discussion
log in or register
loader
Chats
Заголовок открываемого материала
Worldwide
InternationalEnglishEnglishMundoEspañolSpanish
Europe
DeutschlandDeutschGermanFranceFrançaisFrenchΕλλάδαΕλληνικάGreekItaliaItalianoItalianČeská republikaČeštinaCzechPolskaPolskiPolishСрбиjаСрпскиSerbianLatvijaLatviešuLatvianLietuvaLietuviųLithuanianMoldovaMoldoveneascăMoldavianБеларусьБеларускiBelarusian
Transcaucasia
ԱրմենիաՀայերենArmenianАҧсныАҧсышәалаAbkhazХуссар ИрыстонИронауОssetianსაქართველოქართულიGeorgianAzərbaycanАzərbaycancaAzerbaijani
Middle East
Sputnik عربيArabicArabicTürkiyeTürkçeTurkishSputnik ایرانPersianPersianSputnik افغانستانDariDari
Central Asia
ҚазақстанҚазақ тіліKazakhКыргызстанКыргызчаKyrgyzOʻzbekistonЎзбекчаUzbekТоҷикистонТоҷикӣTajik
East & Southeast Asia
Việt NamTiếng ViệtVietnamese日本日本語Japanese中国中文Chinese
South America
BrasilPortuguêsPortuguese
NewsfeedBreaking
06:10 GMTReports Reveal Name of Suspect in Sir David Amess' Shocking Assassination
06:02 GMTJapan's New Prime Minister Visits Crippled Fukushima Nuclear Plant
05:46 GMTBoris Johnson, Chancellor Sunak Reportedly at Odds Over Cost of UK Moving to Carbon-Free Economy
04:59 GMTSoyuz Spacecraft With First Feature Film Crew in Space Returns to Earth
04:30 GMTYou Shall Not Pass: Cat Boxes With Cute Shiba Inu
03:54 GMTFormer UT Professor Offered Job Back After Being Cleared of Inappropriate Ties With Beijing
02:53 GMTBiden Says It Is Harder Than Ever to be a Cop in America
02:52 GMTChina Tested New Space Capability With Hypersonic Missile in August - Report
01:49 GMTSoyuz Spacecraft With Film Crew Leaving International Space Station
00:33 GMTVienna Flaunts its ‘Explicit’ Artworks on OnlyFans Amid Censorship on Nudes
YesterdayVenezuelan Government to Suspend Negotiations With Opposition Over Extradition of Alex Saab to US
YesterdaySyria Accuses Israel of Killing Head of Cabinet’s Golan Affairs Office - Reports
YesterdayRobert Durst on Ventilator Battling COVID-19, Amid Life Sentence, Lawyer Says
YesterdayBill Clinton to Remain Hospitalised Until Sunday - Spokesman
YesterdayTexas Senate Passes Athlete Bill Targeting Transgender Youth
YesterdayNew Satellite Images Reportedly Show That Trump's Scotland Golf Course Wrecked a Sand Dune System
YesterdayAt Least 10 People Dead, 18 Missing in India's Kerala Due to Bad Weather - Reports
YesterdayPablo Escobar's 'Cocaine Hippos' Breeding Out of Control
YesterdayIsraeli Army Creates Secret Base to Monitor Iran's Activities - Reports
YesterdayMacron Slams 1961 Paris Police Killing of Algerian Protesters as 'Inexcusable' - Office