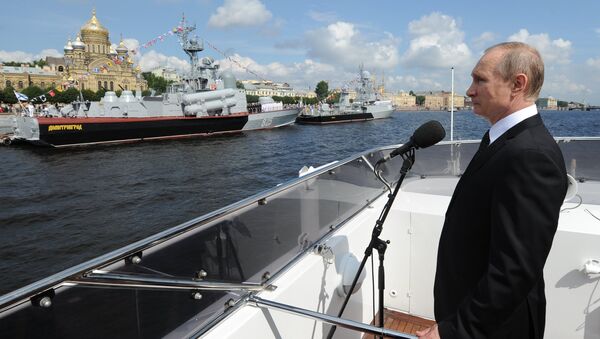 "I congratulate all who are guarding the maritime borders of our motherland, who are serving on surface vessels and submarines, marine aviation and coastal defense troops, who work at shipbuilding factories, all those who protect the interests of our homeland, uphold the honor of our flag in the global ocean, fight piracy and terrorism, and provide safe boat traffic," the president said addressing Baltic Fleet servicemen.

Navy Day is celebrated in Russia on the last Sunday of July. This year it falls on July 31.

The president thanked the families of Navy servicemen for their support:

"Navy Day is not just a state holiday but your family holiday as well, being an old and exalted Navy tradition."

The President boarded the Aurora cruiser, examined the top deck and the radio cabin. The Aurora's commander put him in the picture about the reconstruction works of the vessel.

Putin congratulated Navy veterans, for whom "[Navy Day] became their fate, purpose of life, the most important issue."

The head of the Russian state added that currently the Russian Navy is receiving "modern vessels equipped with advanced arms" to make it capable of tackling existing challenges and threats.

Putin's visit to the legendary ship was broadcast on the Senate Square, one of the city's main sites, which has hosted thousands of people gathered to celebrate the Navy Day.

The Navy Day is one of the most popular holidays in Russia. Every naval base hosts concerts and firework displays at the end of festivities.

The Aurora cruiser is a Russian unique historical monument, a symbol of the October Revolution in 1917. This is the only ship of the national fleet, which participated in the Russo-Japanese War, the World War I and the Great Patriotic War. It has been under reconstruction works since September of 2014.

000000
Popular comments
Congratulations for Russia's Navy Day! To all Navy Soldiers of the Russiand Ferderation and his President Dr. Wladimnir Putin! Hurra!
Joesi
31 July 2016, 14:16 GMT2
000000
With the navy day back in 2000 which was the first year for Mr. Putin of Russia, these USA congressional papers are interesting to read. Apart from the Clintons not endorsing him as a new president of Russia, the congressional explicit formulations in connection to the communistic China is quite revealing. As late as in the new millennium, the congressional brain drains are still feeding on the threat of communism.. Is there anyone who think these morons "over there" have changed in belief of threats from communism? And yet they managed with 9/11 2001! books.google.no/books id=s4Mr9J8dOscC&pg=PA11006&lpg=PA11006&dq=Clinton+administration+was+not+endorsing+Mr+Putin+as+the+new+Russian+president.&source=bl&ots=3U5-7iecO8&sig=xVe9tjQCvnJafIxDYOcA5Sm2-r8&hl=sv&sa=X&ved=0ahUKEwir5Pmt5J3OAhUGDJoKHRYFCx8Q6AEILzAH#v=onepage&q=Clinton%20administration%20was%20not%20endorsing%20Mr%20Putin%20as%20the%20new%20Russian%20president.&f=false
ptcjm
31 July 2016, 16:30 GMT
000000
Newsfeed
0
New firstOld first
loader
LIVE
Заголовок открываемого материала
Access to the chat has been blocked for violating the rules . You will be able to participate again through:∞. If you do not agree with the blocking, please use the feedback form
The discussion is closed. You can participate in the discussion within 24 hours after the publication of the article.
To participate in the discussion
log in or register
loader
Chats
Заголовок открываемого материала
Worldwide
InternationalEnglishEnglishMundoEspañolSpanish
Europe
DeutschlandDeutschGermanFranceFrançaisFrenchΕλλάδαΕλληνικάGreekItaliaItalianoItalianČeská republikaČeštinaCzechPolskaPolskiPolishСрбиjаСрпскиSerbianLatvijaLatviešuLatvianLietuvaLietuviųLithuanianMoldovaMoldoveneascăMoldavianБеларусьБеларускiBelarusian
Transcaucasia
ԱրմենիաՀայերենArmenianАҧсныАҧсышәалаAbkhazХуссар ИрыстонИронауОssetianსაქართველოქართულიGeorgianAzərbaycanАzərbaycancaAzerbaijani
Middle East
Sputnik عربيArabicArabicTürkiyeTürkçeTurkishSputnik ایرانPersianPersianSputnik افغانستانDariDari
Central Asia
ҚазақстанҚазақ тіліKazakhКыргызстанКыргызчаKyrgyzOʻzbekistonЎзбекчаUzbekТоҷикистонТоҷикӣTajik
East & Southeast Asia
Việt NamTiếng ViệtVietnamese日本日本語Japanese中国中文Chinese
South America
BrasilPortuguêsPortuguese
NewsfeedBreaking
15:44 GMTNew Omicron COVID Variant May Cause Stagflation, Economist Warns
15:37 GMTSwedish Parliament Votes Andersson for Prime Minister Again After Surprise Resignation
15:35 GMTRihanna Stuns Netizens With Her Company’s Pyjamas With 'Derriere Cleavage'
15:23 GMT12 Indian Politicians Suspended From Parliamentary Session, Opposition Brands Move 'Undemocratic'
15:22 GMT'Trying to Keep Fart in Your Pants': Piers Corbyn's Anti-Mask Video Baffles Netizens
15:18 GMTRDIF: New Sputnik V Version Adapted to Omicron Variant in Development
14:44 GMTCOVID-19 Cases Among Fully Vaccinated on the Rise in India As Omicron Variant Fears Escalate
14:23 GMTJack Dorsey Expected to Step Down as Twitter CEO, Media Claims
14:19 GMTDOJ Prosecutors Say Bannon Trying 'to Have His Trial Through the Press' Rather Than in Court
14:03 GMTLabour Cabinet Reshuffle Derails Deputy Leader's Tory 'Sleaze Agenda'
13:55 GMTAcademics: There Are Ways to Solve Channel Crisis But France & EU Unwilling to Help Post-Brexit UK
13:54 GMTIran's Navy to Receive New Domestically Produced Anti-Air Missiles, Drones, Warships
13:33 GMTChina Opposes Visit of Baltic Lawmakers to Taiwan
13:33 GMTWatch Live: Ghislaine Maxwell Trial on Sex Trafficking Kicks Off in New York
13:14 GMTHindu Group Members Barge Into Christian Prayer Hall Alleging Religious 'Conversion' - Video
13:04 GMTPoll: Majority of Scottish People Back Doubling Anti-Poverty Payment in December's Budget
12:55 GMT'Washington Must Stop': Moscow Vows to Respond to Upcoming Expulsion of Russian Diplomats From US
12:52 GMTRussia Could Ink $2Bln in Military Deals With India Amid Modi-Putin Talks, Media Claims
12:51 GMT6.5-Magnitude Earthquake Hits Japan
12:46 GMTJeffrey Epstein's 'Pimp' Ghislaine Maxwell to Go on Trial in New York City