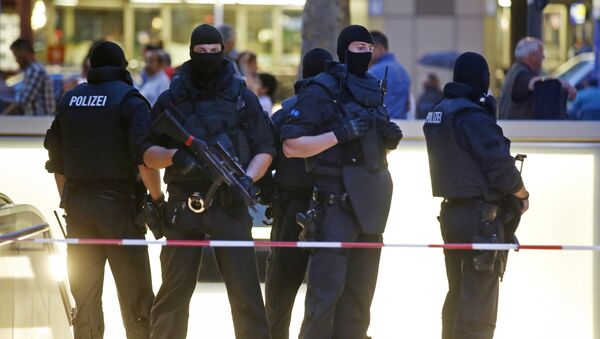 © REUTERS / Michael Dalder
Subscribe
On Wednesday, some 400 German police commandos raided a mosque believed to be a “hot spot” for Salafist extremists in the city of Hildesheim.

Germany's AfD Supports Ban on Foreign Funding of Mosques
When asked by Sputnik why he had ordered the search of the mosque of the “German-speaking Islam Circle” of Hildesheim (DIK), the Interior Minister of Lower Saxony, Boris Pistorius, said that police had long suspected it of having links to terrorist and extremist organizations.

“We want to outlaw this union and have recently stepped up our surveillance. We suspect they are working to undermine our constitutional order and the principles of mutual understanding between peoples. This is enough reason for prosecuting them,” Pistorius said.

He added that Wednesday’s raid followed months of planning and was an important step toward banning the association, which has been used by Islamic fundamentalists to radicalize Muslims and encourage them to take part in jihad in combat zones.

“We can’t rule out the possibility that those who regularly gather there go on to become terrorists and suicide bombers. That’s why it’s absolutely imperative for us to ban this organization,” Pistorius told Sputnik.

When answering a question about how successful police and security forces had been monitoring the potential terrorists’ activities, Boris Pistorius said that they had been closely watching those who pose potential threat.

“However, in Wurzburg and Ansbach we saw that [the terrorists] turned out to be people who had never been suspected before. There is heightened threat of terrorism now existing in Germany where a lone attacker or a group of terrorists can strike out any time. Ansbach and Wurzburg showed how fast such an attack can happen,” he noted.

The Interior Minister of Mecklenburg-Upper Pomerania recently said that in the event of a terrorist threat he would be ready to send in an army battalion. His Bavarian colleague said he was even ready to change the Constitution.

“Theoretically, our laws allow the use of the armed forces in such situations, but what exactly the Bundeswehr is going to do and exactly which armed services our colleagues have in mind? The Bavarian minister wants to give the military a complete freedom of hand at home. But would this have changed the course of things in Ansbach and Wurzburg? I’m surprised to hear such proposals coming from these two ministers after what happened in Ansbach and Wurzburg."

According to Boris Pistorius it is a big priority for Germany to move quickly to deport potentially dangerous people.Germany has recently seen a rash of deadly terrorists attacks carried out by migrants.