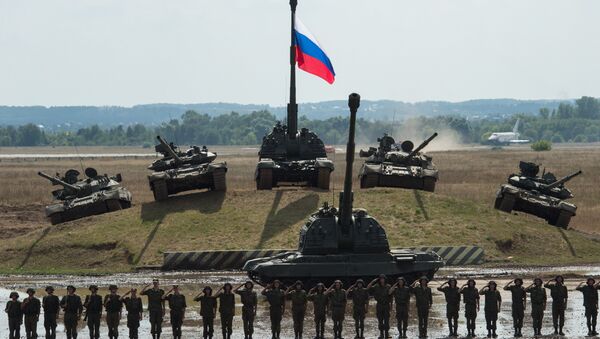 © Sputnik / Ramil Sitdikov
/
Go to the photo bank
Subscribe
The top NATO General in Europe credits Russian forces with "impressive" progress and "agile" thinking, but falsely assumes that the resurgence of Russia necessitates a return to Cold War style belligerence.

Top US General Rushes to Turkey Amid Accusations US Plotted Coup
"Russia is back," said General Curtis Scaparrotti, NATO’s Supreme Allied Commander Europe (SACEUR) in his opening statement at the Aspen Security Forum on Friday suggesting that Moscow’s once suppressed military capabilities have returned with a vengeance.

The top NATO General in Europe complimented the Russian army on its shift towards a more professional, faster-learning, and more-agile way of thinking, but noted that Moscow’s significant progress makes for "a very serious adversary" for the United States.

As President Barack Obama once said in humorously blasting his 2012 presidential election rival Mitt Romney’s assertion that Russia is America’s primary foe – "The 1980s are calling, they want their foreign policy back."

​Russian President Vladimir Putin has made similar assertions decrying the myth of 'Russian aggression' and saying one year ago that "I think that only an insane person and only in a dream can imagine that Russia would suddenly attack NATO."

In fact, Russians have stood at the frontlines of the fight against Daesh terrorists in Syria and even offered to join the US-led 45-nation coalition combating the Islamic extremists with the hope of avoiding strategic mix-ups with NATO’s airstrikes, but Washington moved to ban Moscow from cooperating.

The running theme in 2016 seems to be that Russia is not only a country showing great advances, but that those steps towards progress pose some inherent danger to the West – a theme that has culminated in massive 30,000 troop war games along Russia’s border with Poland unfortunately timed on the 75th anniversary of the Nazi invasion of the former Soviet Union and now bizarre conspiracy theories that Moscow is sticking its thumb on the scale in the US presidential election.

Still there is no doubt that the Russian military’s capabilities have advanced to unparalleled levels as the world has looked on at the extraordinary power and skill of the country’s fighting force in Syria.

"When you look at the weapons systems… They’ve been watching us… They’ve fired long-range precision missiles from submarines, from surface ships, from medium bombers, all at Syria," said General Scaparrotti gushing about Russia’s multi-layered defense capabilities.

"You can see that they’re learning, much of their doctrine is based on the early Soviet doctrine," said General Scaparrotti. "They are pretty agile of thinking, if you look at the recent writings that their officers are doing. So they are actually taking a look at the world around them as they see it and adjusting their doctrine off that basis, which is impressive."

What appears wanting in General Scaparrotti’s assessment, however, is the assumption that Russia is the enemy saying "You know, we have an adversary here that we have to take very seriously."

Russia has responded calmly to growing threats from NATO including the installation of missile-defense systems in Romania and Poland as well as a permanent troop presence stationed on the Polish-Russian border – provocations that Russian Envoy to NATO Alexander Grushko warns are "bringing us back to the safety models of the Cold War era."