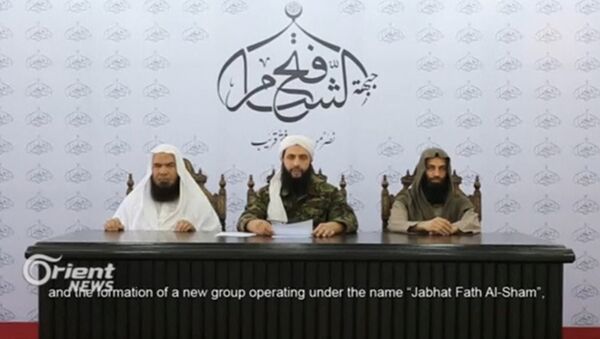 © REUTERS / Orient TV/Handout via Reuters
Subscribe
Iran’s Foreign Ministry spokesman Bahram Qassemi called the desicion of the Nusra Front terrorist group to change its name "a sign of the political bankruptcy of the extremists’ regional supporters headed by Saudi Arabia."

US to Take Same Approach to Nusra Front Amid Alleged Divorce With Al-Qaeda
MOSCOW (Sputnik) — A recent move by the Nusra Front terrorist group to change its name is a sign of political bankruptcy of the extremists' regional supporters, Iran’s Foreign Ministry spokesman Bahram Qassemi said.

On Thursday, a video was aired of Mohammed Jolani, the leader of Nusra Front, outlawed in Russia and numerous other countries, saying the group had split from al-Qaeda and changed its name to Jabhat Fath al Sham, or "The Front for Liberation of al Sham."

"The objective behind the game is to remove the group from terrorism list, but the ugly image of extremism and terrorism cannot be whitewashed through such moves… Such measures are a sign of the political bankruptcy of the extremists’ regional supporters headed by Saudi Arabia as the father and principal supporter of al-Qaeda, Taliban, Daesh (ISIL or ISIS), al-Nusra Front and many other terrorist groups, particularly in Syria," Qassemi said on Thursday night, as quoted by Tasnim News Agency.

What Lies Behind Al-Nusra Front's Decision to Break Ties With Al-Qaeda
The international community should pay attention to the core causes of terrorism and force the founders and supporters of terror groups to uproot extremism, he stressed.

Nusra Front, as well as other extremist groups, has been fighting in Syria against government forces since the outbreak of a civil war in the country in 2011.