PACE May Ease Sanctions Against Russian Delegation to Assembly 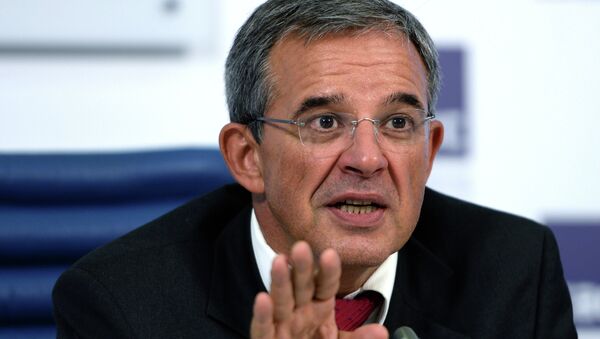 The Parliamentary Assembly of the Council of Europe (PACE)could make steps toward easing sanctions against Russia, according to French parliament Foreign Affairs Committee member Thierry Mariani, who is also a member of the French delegation to PACE.

Crimea's Merger With Southern Russia Will Complicate West's Sanctions Game
MOSCOW (Sputnik) — The Parliamentary Assembly of the Council of Europe (PACE) may ease sanctions against the Russian delegation to the Assembly, French parliament Foreign Affairs Committee member Thierry Mariani, who is also a member of the French delegation to PACE, told Sputnik on Friday.

"I am cautiously optimistic that there will be steps toward easing sanctions against Russia. It is unrealistic to talk about the return of the delegation to the PACE in its normal stature, however, Russia may be grunted back its right to vote but not a right to organize meetings," Mariani, who is also heading a delegation of French lawmakers to Crimea, said.

He underlined that incumbent PACE President Pedro Agramunt stood for the return of Russia's delegation to the organization.

"PACE President Pedro Agramunt is someone who wants to find a solution. It it crucial to listen to Russia's opinion during any discussion on the Ukrainian crisis," Mariani said.

French Envoy Warns That Anti-Russian Sanctions at Breaking Point
He pointed, however, that some delegations to PACE will do everything in their power to prolong sanction against the Russian parliamentarians. "They see Russia's absence in PACE as their personal victory," the lawmaker noted.

PACE barred the Russian delegation from participating in three key bodies – its bureau, presidential and standing committees – in 2014.