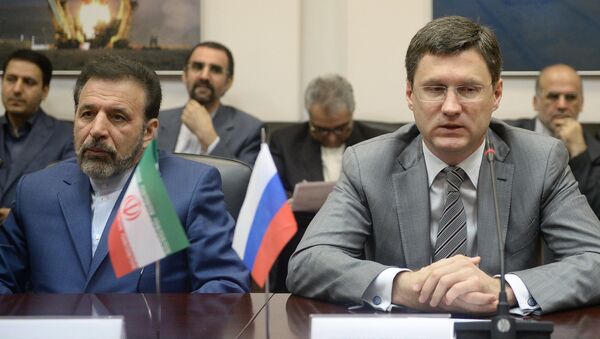 Russian Energy Minister Alexander Novak said that he and Iranian Communications Minister, Mahmoud Vaezi discussed the issues related to the study into the possibility of establishing the Free Trade Area between countries and noted the progress made in this direction.

Russia, Iran to Sign Industrial Cooperation Roadmap With Over 70 Projects
MOSCOW (Sputnik) — Russia and Iran expect a Joint Study Group working on the establishment of the Free Trade Area (FTA) to submit the action plan for FTA's establishment by the end of 2016, Russian Energy Minister Alexander Novak said Friday.

Earlier in the day, Novak met with the co-chair of the Russia-Iran joint economic commission and Iranian Communications Minister, Mahmoud Vaezi.

"We discussed the issues related to the study into the possibility of establishing the Free Trade Area and have noted the progress made in this direction. We expect that by the end of the year, a Joint Study Group will finish the work and will submit proposals of the action plan for the Free Trade Agreement preparation," Novak said.

In March, Russian Deputy Economic Development Minister Alexei Likhachev said that a dedicated Joint Study Group is expected to decide on the format of the FTA between the EEU and Iran during the first half of 2016, adding that the format would not be in a pure form.

In late December, it was reported that the EEU, comprising Russia, Armenia, Belarus, Kazakhstan and Kyrgyzstan together with Iran were beginning to work on a free trade zone agreement.