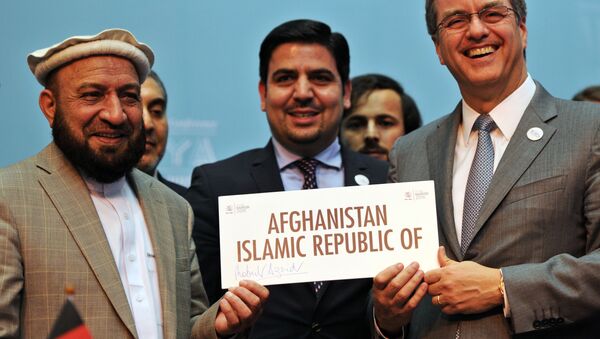 Afghanistan expects that the economic ties between Kabul and Moscow would strengthen, following the Asian nation's accession to the World Trade Organization (WTO), Afghanistan’s Deputy Minister for Trade Mozammil Shinwari told Sputnik in an interview.

"The economic relations between Afghanistan and Russia will strengthen more since now both the countries are WTO members… Afghanistan is also eligible to get duty-free quota-free market access in Russia as well as all developed countries as well as some developing countries," Shinwari said.

He added that Russia was potentially an important trade partner for Afghanistan, despite the fact that Moscow was not among top five Kabul's trading partners.

Afghanistan may consider the dispute settlement mechanism of the World Trade Organization (WTO) in solving its dispute with Pakistan if the sides fail to reach accord through dialogue, Afghanistan’s Deputy Minister for Trade Mozammil Shinwari said.

"On the issue of Pakistan, we feel that the freedom of transit can be solved bilaterally through a dialogue. Not only we are members of WTO but also members of SAARC [South Asian Association for Regional Cooperation] and ECOTA [Economic Cooperation Organization Trade Agreement] and therefore we are taking a comprehensive approach on this issue… As a last resort one can consider taking the route of WTO Dispute Settlement process, however, this has so far not been tested in WTO," Shinwari said, speaking about a potential positive impact of country's WTO accession on the dispute between the two nations.

He added that Kabul's attempts to solve the dispute with Islamabad could include expansion of bilateral trade and energy cooperation.

The Afghan-Pakistan border dispute first started in the 19th century when Pakistan was part of British-owned India. The British imposed the 2,640-kilometer (1,640-mile) border, known today as the Durand Line. Despite past agreements, the Islamabad and Kabul governments have argued over the border for the past 65 years.

Afghanistan hopes that it could become less dependent on international aid and would become more self-reliant, following its accession to the World Trade Organization (WTO), Afghanistan’s Deputy Minister for Trade said.

"We can now focus more on to how Afghanistan can be better integrated with the multilateral trading system, a system which can pave the way for development of Afghanistan. US continuously provide financial and economic assistance to the private sector of Afghanistan. Specific projects are underway for the economic growth of agro-industries development in Afghanistan. but of course we are working on self-reliance programs and hopefully with the passage of time will not need the support," Shinwari said.

He added that the advisers from different countries would assist Afghanistan, following it's accession in order to implement Kabul's commitments and obligations.