Changes Needed in Society to End Deadly Shootings in US - Poll 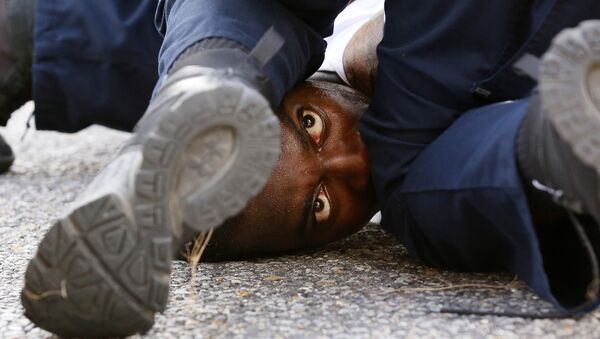 © REUTERS / Jonathan Bachman
Subscribe
Structural changes to society as a whole need in the United States to solve the issues of frequent deadly shootings of unarmed black men and police, according to a poll.

US Police Arrest 41 Protesters Angry Over Officers Shooting of Black Youth
MOSCOW (Sputnik) — US citizens would solve the issues of frequent deadly shootings of unarmed black men and police across the country by making changes to society, the black community, as well as to the police force, a poll reveled Thursday.

The Gallup survey was based on telephone interviews with 1,023 persons older than 18 from across the United Stated and was conducted on July 13-17, 2016.

When asked to name the single most important thing that could be done in order to reduce the number of deadly encounters between members of the black population and police in the United States, respondents offered a variety of solutions which can be divided in three groups, namely structural changes to society as a whole (36 percent), developments in the black community (27 percent) and police reforms (21 percent), the poll found.

Obama Administration to Announce Plan Targeting Racial Segregation in US
Regarding the changes in the black community, the most common response was about the need for change in attitudes toward police and more respect (8 percent), followed by responsibility for one's own actions and obeying the law (6 percent) and education (5 percent).

Some 9 percent suggested additional police training as a necessary step toward change in policing, 5 percent believed police should be more patient, slower to act, should use common sense and less brutality, while 2 percent thought better hiring practices and hiring more qualified police would held solve the problem.

Earlier in July, deadly shootings of African-American men by police in the US states of Louisiana and Minnesota were followed by targeted killings of police officers in the cities of Dallas and Baton Rouge.