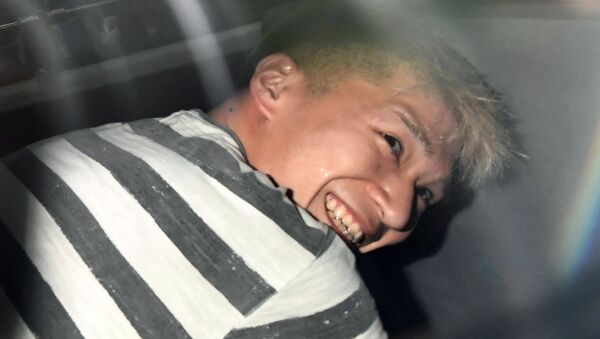 © REUTERS / Kyodo
Subscribe
Satoshi Uematsu, the 26-year-old man who killed 19 disabled people in a care facility for the disabled near Tokyo on Tuesday, expressed admiration for Nazi ideology during a stint in a psychiatric hospital in February. Uematsu was so persistent in his threats that the hospital kept in close contact with police and increased their security measures.

The Japan National Assembly of Disabled Peoples’ International said that Uematsu’s history of hate speech against people with disabilities is indicated by his fascination with eugenics. The lobby group has suggested that the Japanese government put more effort into promoting a less exclusive and xenophobic culture in the country.

The assembly stated that the attack "was nothing but an act based on eugenics, which sees disabled people as those who should not exist."

On Thursday, Prime Minister Shinzo Abe met with ministers and ordered a thorough investigation into the killings. Abe said, "It’s an incident that should not have happened, I will not tolerate it."

Uematsu reportedly began his attack in a wing of the facility staffed primarily by female personnel, restraining them with zip ties, and going from room to room, stabbing patients in their beds, ultimately killing ten women and nine men. He attacked 45 people in total, in what has been identified as Japan’s worst mass killing in postwar years.

According to an official in Sagamihara, Kanagawa Prefecture, Uematsu discussed his attraction to the Nazi ideology of eugenics, which includes the extermination of disabled people. "Hitler’s philosophy dawned on me two weeks ago," the killer said on February 20.

He also told the official that "There are 800 million people with disabilities worldwide," and that, "Money is spent on them. It should be used for other purposes."

In response to his pronouncements, executives at the Kanagawa Kyodokai company, which operate the care home, consulted with police officers and installed 16 additional security cameras. They stayed in close-enough contact with police that officers at the Tsukui Police Station knew an emergency call from the facility would likely involve Uematsu. Police warned staff at the facility to not let him in and to call if he showed up.

Such an incident seemed likely on June 4, during an annual summer festival. Kaoru Irikura, who heads the facility said, "Because he used to be in charge of the event, we were concerned that he might show up…I gave firm instructions to staffers to report it immediately if he dropped by."

Staff spent most of that day securing the event to make sure Uematsu was not present. Personnel were assigned to keep watch over patients when they went out for walks.

"We wanted to prevent him from entering the facility. We didn’t think there was imminent threat," said Miki Akagawa, a Kanagawa Kyodokai official.

Facility managers were not aware of a letter Uematsu sent to the Lower House of Japanese Parliament in February, calling for disabled people to lose their lives in "a world that allows mercy killing."

The attacker first worked at the care center in December 2012, as a temporary worker, before securing a fulltime position the following April. He was committed a day after leaving his job, and was found to have marijuana in his system and was subsequently diagnosed with a psychiatric illness exacerbated by drug use.