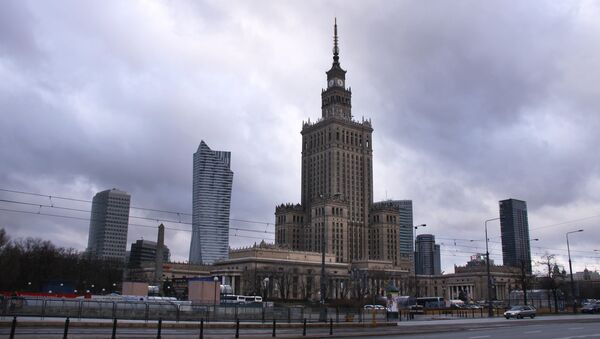 © Flickr / Michel G.
Subscribe
Warsaw has been warned that it could lose its voting rights in the EU over 'anti-democratic' changes to Poland's constitutional court. Polish-American political analyst Adam Twardowski warns Europe watchers that if they thought Brexit was bad, they should wait for the fallout from the conflict brewing between Brussels and Warsaw.

On Wednesday, EU Commission vice-president Frans Timmermans said that the current Polish government had failed to guarantee the independence of the country's courts. Subsequently, Brussels warned that unless Warsaw changes its position, it will be sanctioned, up to and including the loss of voting rights in EU institutions.

EU Threatens Poland With Sanctions Over Rule of Law Row
Late last year, the newly elected conservative nationalist Law and Justice Party government made reforms to the country's constitutional court, curtailing its powers and attempting to bring in new judges aligned with the government. Together with other changes, the move culminated in a standoff between Warsaw and Brussels which has yet to be resolved.

Commenting on the deteriorating relationship in an article for The National Interest magazine, contributor Adam Twardowski lamented that Poland has lost much of its influence in the supranational organization, and even warned that Warsaw could even threaten the bloc with a fundamental and anti-democratic transformation.

The geopolitical analyst recalled as little as a year ago, Poland was enjoying "more influence in Europe than at any point in its history." Reforming its economy and institutions, the country had "earned a seat at Europe's head table." In 2014, "in a highly symbolic gesture, the union's leaders elevated Poland's prime minister, Donald Tusk, to the presidency of the European Council."

"Fast forward to summer 2016. Poland's de facto leader, Jaroslaw Kaczynski, is back in power. Poland is now sidelined in the EU, subject to its rule-of-law mechanism following the ruling party's assault on the Constitutional Tribunal. Polish leaders have soured relations with their hugely important neighbor, Germany, by railing against perceived German bullying of Polish interests. Poland's reputation as a reliable European partner is tarnished after its leaders refused to cooperate on migration and climate change."

Paranoia Over 'Imminent Russian Invasion of Poland' Gives Analysts a Good Laugh
In less than a year's time, Twardowski complained, Poland, "once hailed as a success story of European expansion," is facing a situation where the "success and vitality" of the country's democracy "are being called into serious question, for the first time since its emergence from the Cold War."

For now, the analyst wrote, EU observers have focused almost all their attention on the consequences of the UK's decision to leave the EU, leaving the crisis between Warsaw and Brussels to temporarily fall off the radar.

But Brexit never really posed a serious threat to the EU, according to Twardowski. "The original bedrock of the European project was, after all, Franco-German unity. It later grew to include other countries and a broader mission of, among other things, bolstering the rule of law. The UK was always an unenthusiastic participant in that wider project, so the past few weeks' market gyrations notwithstanding, the EU will continue without it."

In fact, the conflict between Brussels and Warsaw is actually much more dangerous, the analyst said.

"The EU is far less likely to survive the degradation of its norms by member states that were admitted a decade ago at great risk and expense for the union. The EU's success depends not only on open trade and free movement, but on a common conviction that Europe cannot be divided along the lines of rule of law."

Unlike the UK, which is likely to be made an example of in order to dissuade others from holding similar referendums, Poland, according to Twardowski, "offers Euroskeptics a more attractive path forward. If the EU fails to address Poland's democratic backsliding, as it failed to deal with Viktor Orban's Hungary, Euroskeptic parties may attempt to achieve some of their goals by denigrating EU norms while extracting only the benefits of EU membership."

Polish Court Starts Trial Against German Broadcaster Over WWII TV Series
"Hungary," the analyst added, "was a fairly small case" with its less than ten million people. "But Poland is much larger, with nearly forty million people, and could become a model for Euroskeptics emboldened by Brussels' inability or unwillingness to enforce rule-of-law norms. If that happens, the purpose and character of the EU will be eroded far more severely than by Brexit."

Ultimately, it remains an open question as to whether Eurokeptics will now turn to trying to break up the EU from within. However, the fact that Brussels is citing its concerns with the "success and vitality" of Poland's democracy, despite the fact that decisions on the constitutional court were made by a government elected by a majority of Poles, seems to indicate there are more serious issues at stake. Perhaps Brussels would be better served by paying closer attention to the less than democratic nature of its own bureaucratic institutions, including the fact that many of its top officials were never elected.