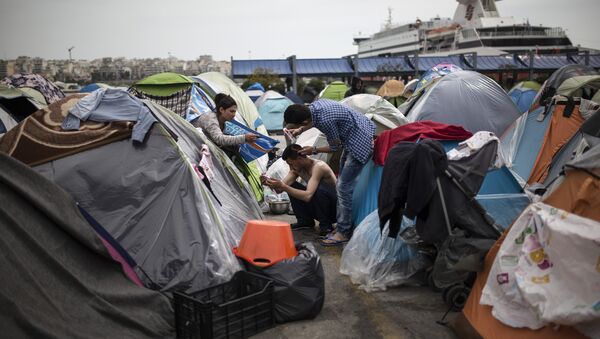 The Greek authorities have evacuated all migrants from the Port of Piraeus in Athens, the Greek Central Coordinating Body for the Management of Migration said Thursday.

Boat With Migrants Capsizes Near Greece's Lesbos, 4 People Dead, 4 Rescued
ATHENS (Sputnik) — The Greek authorities have repeatedly tried to relocate migrants staying at the port to refugee reception centers over recent months. Conditions in the port have progressively worsened as migrant numbers swelled, leading to clashes between different ethnic groups and causing unsanitary conditions. Around 6,000 people were squatting at the port in April.

On Monday, around 1,000 people remained in Piraeus, with the number reaching zero after the last 426 people left the port on Wednesday, heading to reception centers across the country, according to the coordinating body.

A total of 57,027 refugees were registered by the body on Thursday morning. The last 24 hours saw the arrival of 108 refugees in Greece, with 35 arriving on the island of Lesbos and 72 arriving on other islands.

The European Union has been struggling to manage a massive refugee crisis, with hundreds of thousands of people leaving conflict-torn countries in the Middle East and North Africa to escape violence and poverty and seeking asylum in Europe. The EU border agency Frontex detected over 1.83 million illegal border crossings in 2015, in contrast to some 283,000 in 2014.