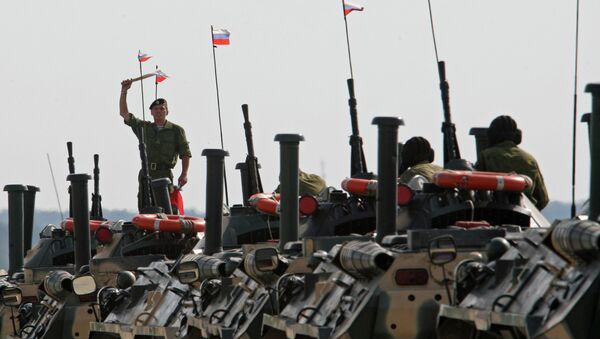 Russian analysts, baffled by a former NATO deputy chief's suggestion that Moscow was prepared for a lightning invasion of Poland, decided to ask a couple questions about Russia's so-called invasion plans. Chief among their queries was 'Why do we need Poland again?'

Over the weekend, a frightening report written by the Atlantic Council emerged in the media, urging NATO to "significantly increase the [alliance's] troop presence in Poland" or face a Russian sneak attack. The briefing, written by former NATO Deputy Supreme Allied Commander in Europe General Sir Richard Shirreff, warned that Russia is clearly "capable of surprising the West…with potentially devastating consequences for eastern Poland and fatal consequences for the Alliance."

Russia
Former NATO Chief: Russia to Invade Poland, Start World War III ‘Overnight’
The briefing also suggested that even if Moscow is not interested in a direct confrontation with the alliance right now, "this may unexpectedly change overnight, and can be implemented with great speed, following already prepared plans."

According to the Atlantic Council expert, Crimea's return to Russia in 2014, which he called an 'annexation', demonstrates just how quickly Russia is capable of acting. The report's conclusion? That NATO must be able to respond to a Russian surprise attack in full force. This, according to the report, includes possible attacks on the Moscow metro, on St. Petersburg's electric grid, and on the Russian foreign language broadcaster RT.

Moreover, the report suggests that for its part, "Poland should [also] declare that, if attacked, it reserves the right to dispatch Special Operations Forces (SOF) into Russian territory such as Kaliningrad, in order to help destroy high-value targets, e.g. the Pantsyr and other missile batteries, which may be difficult to disable by methods such as jamming."

Curiously, the hysteria contained in the Atlantic Council report isn't limited to the offices of the Washington-based think tank. Last month, US deputy assistant secretary of defense for Russia, Ukraine and Eurasia Michael Carpenter warned that Russia could overtake NATO defenses in just 60 hours.

For his part, Foreign Minister Sergei Lavrov had to reiterate last month that Russia would never attack any NATO country, or any country for that matter. "NATO," Lavrov noted, "is perfectly aware of this, but uses the occasion to place more heavy equipment and battalions in the area to guarantee that the US can continue to keep an eye over the area."

Think-Tank Piece on ‘Overnight’ Invasion of Poland by Russia ‘Pseudo-Analytical’
For their part, Russian analysts were similarly puzzled by the apparent fears of a Russian invasion of Poland. The central question accompanying their deliberations was a simple one: 'Why on earth would Moscow need to invade Poland?'

Speaking to the independent Russian online newspaper Svobodnaya Pressa, political scientist Vadim Trukhachev suggested that the reason for the hysteria coming out of leading US think tanks is obvious: They "have to show that they aren't being paid for nothing – that what they're really doing is important work."

At the same time, the expert noted, Western expert circles are "dominated by people whose worldview was formed during the Cold War. For this reason they believe that the main threat to the US and NATO comes from Russia, and that the West must be prepared for war against Moscow."

Asked why Poland, which carries no strategic interest for Russia and which doesn't even have a Russian-speaking population, is seriously considered as a target, Trukhachev suggested that formally, the reasons include its proximity to the Kaliningrad region, Poland's role as the largest country in Eastern Europe, to the long history of bad blood between Poland and Russia, and the US anti-missile base now being built in the country.

"But all of these arguments are also from the realm of fantasy. For Russia there is absolutely no sense in attacking Poland. The country has no mineral resources, no important industry to speak of, no strategic points. And on top of that there is a nearly 40 million-strong, hostile population. This is a country with its own, centuries-long history, its own language, and a religion different from ours. Poland was a heavy burden, which factually helped to destroy the Russian Empire. The Russian leadership would never repeat mistakes [from centuries ago]."

Belarus's New Military Doctrine: NATO, Color Revolutions Main Threats to Country
Asked whether anyone in Poland actually believes in the nonsense about an imminent Russian invasion, Trukhachev noted that unfortunately, propaganda can go a long way. "The sentiment of a 'frightening Russia' looking to come and take over Poland is supported by the ruling Law and Justice Party." Within that party, the analyst noted, the kinds of anti-Russian remarks regularly made by Defense Minister Antoni Macierewicz and Foreign Minister Witold Waszczykowski in particular tend to stand out.

"These men are out and out Russophobes with a deformed imagination who see a 'Russian threat' behind every corner…Their antics are necessary to divert the attention of ordinary Poles from an economic policy which hasn't been all that successful, and so that the EU and NATO might give Poland extra money. After all, they're not going to give out much money for Poland's industry and agriculture…Besides its proximity to Russia, Poland doesn't really have any special trump cards in its foreign policy deck."

Presently, Trukhachev noted, "in Poland, to varying degrees, over 80% of the population is fearful of Russia. Given the two countries' difficult common history, this is quite understandable. However, the figures of those who believe that a war between the two countries is possible is significantly lower. The idea of transforming Poland into an arena for combat operations finds little sympathy in Polish society, and most Poles do not want to fight with Russia for any reason."

As for the NATO battalions being deployed in Poland and the Baltics, the political scientist compared these to the phenomenon of wild animals marking their territory. "Their purpose is to show Russia who's boss in the region. At the same time, the Poles and the Balts want to be assured that they will not be abandoned in the face of 'terrible Russia'. What's more, in Poland even many hawks would prefer that Poland fights Russia using the US military."

Underwater Battle: NATO Not Ready for Russian Sub Threat, Report Reveals
Ultimately, Trukhachev noted, "Poland and the Baltic countries will gain a certain level of confidence from the deployment of these battalions on their territories. On the other hand, they also risk becoming targets. After all, if a real war were to break out, there would be virtually nothing left of the entire Baltics and almost half of Poland."

Unfortunately, the expert noted, the myth of the 'Russian threat' "it will live on in the West for very long still, and longer still in Poland. To discredit it, the continent's migration crisis will have to become even worse, so that European politicians find something else to do. For its part, Russia must work more actively with civil society of individual countries, including Poland. We need to show the real image of Russia, without missiles, vodka and bears."

For his part, Stanislav Byshok, a political analyst at the international monitoring organization CIS-EMO, emphasized that it's entirely possible for analysts to create hypothetical scenarios which even they themselves do not believe in. Unfortunately, he noted, given the difficult history of Eastern Europe, accompanied by the repeated loss of sovereignty over many centuries, what is presented as a purely intellectual exercise for Washington or Western Europe quickly comes to be seen as a real threat for the region.

Byshok also pointed out that the regular characterization of Russia as a threat, equal to terrorism or some other global problem, is hurtful, but entirely rational from the perspective of Western officials. "In psychology, there is a term called 'narcissism of small differences', describing a pattern in which communities with similar cultures face outbreaks of mutual hostility and massacres more frequently than between those which are completely different."

Essentially, the analyst noted, this term fits the relationship between Russia and the West quite well: "Russians, who are also Christians and Europeans, are at the same time a little different from Western Europeans," and for this reason "fit the role of 'enemy' better than bearded Islamists coming from the deserts of the Middle East."