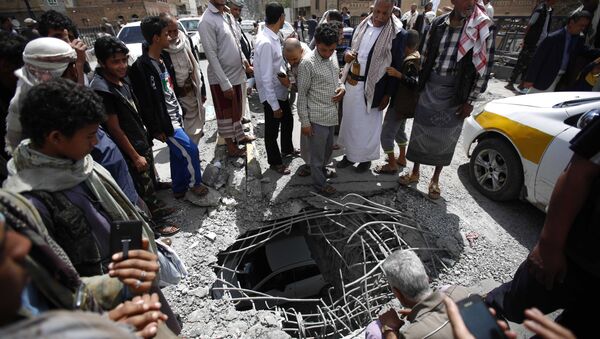 New UK Foreign Secretary Boris Johnson is under pressure from lawmakers to reverse British policy and support an independent investigation into alleged Saudi breaches of international law in Yemen.

In a letter to Johnson, Stephen Twigg, the chairman of the International Development Committee, called for an investigation after the Foreign Office made a series of corrections to previous oral and written statements made by ministers in regards to the Saudi military offensive.

While previous statements ensured MPs that Saudi Arabia, a key British ally, had not breached international humanitarian law (IHL) in Yemen, the corrections seemed to backtrack on earlier statements, with the revisions saying the UK government was unable to assess whether such breaches had occurred.

#YemenDebate Twigg urges UK govt support "a genuinely independent, UN-led inquiry into the serious allegations of the violation of IHL" (18)

​"Last week's corrections are a significant revision of the evidence the government has given to my committee and to parliament and call into question the depth of the UK government's specific assessments of Saudi operations or of the evidence heard by my committee on alleged violations of IHL," Twigg wrote.

"I appeal to you to take a different approach from your predecessor, and to now press for a truly independent, international investigation into violations of IHL in Yemen."

The UK government has previously rejected calls for an independent investigation into alleged IHL breaches in Yemen, despite UN allegations that the Saudi-led military coalition has been responsible for killing more civilians than any other group involved in the conflict.

It is estimated that out of the 6,000 people killed in the conflict since March 2015, more than half of the victims have been civilians.

.@ionacraig It's hard to avoid civilian casualties in bombings. Especially when you don't give a damn. #SaudiArabia #Yemen

​In responding to the international development committee, the government said it wasn't opposed to the idea of an independent investigation into alleged Saudi law violations, but "first and foremost it wanted to see the Saudi government investigate alleged breaches of IHL which are attributed to them and for the investigations to be thorough and conclusive."

​The developments have highlighted the close relationship between the UK and Saudi Arabia, with London heavily criticized for continuing to sell arms to the Gulf kingdom despite claims of human right violations in Yemen.

​​As a result of these concerns, along with evidence that British-made weapons have been used by Saudi officials in the conflict, the UK-based Campaign Against Arms Trade has launched legal action against the UK government over its continued arms sale to Riyadh.

New figures have shown British officials granted arms export licenses worth US$4.3 billion (£3.3 billion) to Saudi Arabia during the first 12 months of conflict in Yemen.