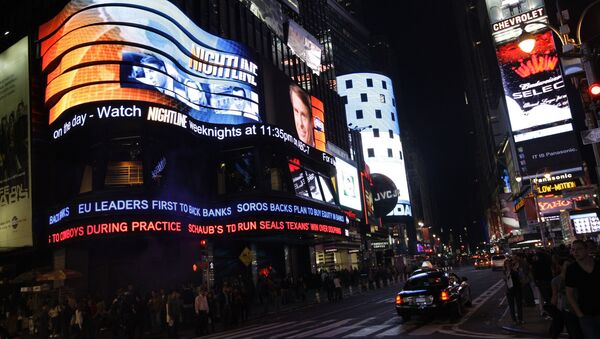 If you live in Manhattan and know nothing about what’s going on in the South China Sea, you have a wonderful opportunity to get acquainted with the history of the region and the saga that’s going down in it, thanks to a three-minute video, courtesy of Beijing, aired right in the middle of Times Square.

Projected from one of the large media screens in Times Square, the video tells the story of how the sea that we now know as the South China Sea was discovered, named and developed. It also features a number of experts from various countries that support China's position — one that rivals in the disputed part of the world would surely take issue with.

"The ‘dual-track approach' suggests that the relevant disputes are to be resolved through friendly consultations and negotiations between the states directly concerned," according to the narrative.

The video has already received some emotional response from the media, with BuzzFeed calling it "Boring AF" and "three minutes and twelve seconds of your life you won't get back." Other media outlets have dubbed it the "newest propaganda piece," noting that the cost of the video airing may range from $300,000 (2 million RMB) to $400,000 (2.6 million RMB) a month.

The South China Sea disputes involve both island and maritime claims among several sovereign states within the region. Non-claimants want the South China Sea to remain international waters, with the United States conducting "freedom of navigation" operations. In July, a Hague tribunal ruled against China's territorial claims in "Philippines v. China" case. Although the ruling is not binding by itself, China states it won't acknowledge the tribunal nor abide by its findings, insisting that any resolution should be through bilateral negotiations with other claimants.

The video, aimed to deliver China's position to a wider audience, will be aired 120 times a day until August 3, on a 19-meter-high, 12-meter-wide media screen that has displayed images of China since 2011, which earned it the "China Screen" nickname. The estimated reach of this video is about 500,000 passers-by each day.