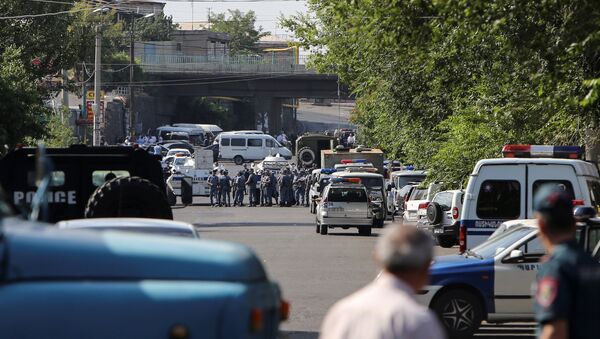 The armed group seized a police patrol station in Yerevan demanded that the doctors among hostages will be freed if the health minister comes personally and organizes medical operations on the station.

MOSCOW(Sputnik) — An armed group that seized a police patrol station in Yerevan announced the conditions on Wednesday under which it would release ambulance staff who earlier came to the station to assist the wounded and were taken hostage.

Two Members of Group That Seized Yerevan Police Station Surrender After Gunfight
Earlier, a member of the armed group, Alec Yenikomshian, had reportedly said beforehand that the medics had not been taken hostage but had been asked to stay to provide ongoing medical assistance to a wounded member of the group. He added, that the medics had not come to the station for three days.

"The doctors will be freed if the health minister comes personally and organizes [medical] operations on this territory," the group demanded in a written statement.

On July 17, the armed group took several police officers hostage at a patrol police station in the Erebuni district of Yerevan. The hostage-takers are demanding the release of Jirair Sefilian, an opposition politician and the founder of the New Armenia Public Salvation Front. He took part in the 1988-1994 Nagorno-Karabakh conflict with Azerbaijan and is accused of the illegal acquisition and possession of arms.