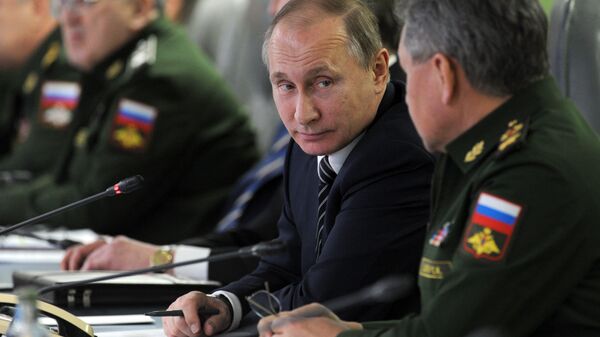 © Sputnik / Mikhail Klimentyev
Subscribe
International
India
Africa
Ilya Tsukanov
All materialsWrite to the author
Commenting on the Democratic National Convention's claim that Russian intelligence was behind the leak of emails proving that the party deliberately sabotaged Senator Bernie Sanders' presidential candidacy, commentator Pat Buchanan glibly noted that if the allegations are true, it's time President Vladimir Putin be considered for a Pulitzer Prize.

Emailgate 2.0: WikiLeaks Cache Shows Democrats Conspired to Stop Bernie
In the fallout of the scandal, which has already forced Wasserman Shultz to resign, the Clinton campaign has chosen a campaign strategy of shooting the messenger, accusing Russian intelligence, the Russian government and Vladimir Putin personally of being behind the DNC emails hack. The motive, apparently, is Putin's desire to see businessman Donald Trump elected president.

US Media Hides Real Scandal, Says ‘Trump a Manchurian Candidate for Putin’
A cautious Trump supporter, Buchanan began by suggesting that for the Republican Party, "the tale of the thieved emails at the Democratic National Committee is just too good to be true."

'Desperation': Inside Accusations of Russia’s Involvement in DNC Scandal
In fact, Buchanan wrote, the current scandal reminded him of another scandal from over forty years ago.

Snowden Scoffs at Accusations of Russian Hand in US Democrats' Scandal
Turning serious, Buchanan emphasized that "undeniably, if the Russians or any foreign actors are interfering in US presidential elections, we out to know it, and stop it. But who started all this? Since the end of the Cold War, the US has used cyber warfare to sabotage centrifuges in the Iranian nuclear plant in Natanz. We have backed 'color-coded' revolutions in half-a-dozen countries from Serbia to Ukraine to Georgia – to dump rulers and regimes we do not like, all in the name of democracy."