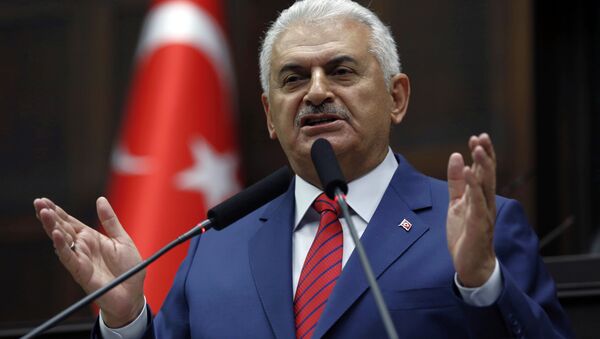 Turkish Coup – a Staged Event Aimed at Changing Constitution?
MOSCOW (Sputnik) — On Monday, Turkish President Recep Tayyip Erdogan held a meeting with chairman of the Republican People's Party (CHP) Kemal Kilicdaroglu and leader of the Nationalist Movement Party (MHP) Devlet Bahceli with Yildirim, who is the head of the governing Justice and Development Party (AKP), also taking part in the meeting.

"We [leaders of three parties] have agreed to make minor changes to the current constitution, and the process to draft a whole new constitution has started," Yildirim said Monday, as quoted by Daily Sabah newspaper, speaking after the meeting of Council of Ministers.

On July 15, a coup attempt took place in Turkey and was suppressed the following day. The Turkish government has accused US-based dissident Fethullah Gulen and his followers of having played a key role in the coup.

Over 240 people were killed and more than 2,000 injured during the failed coup excluding the victims among the plotters, according to the country's authorities.