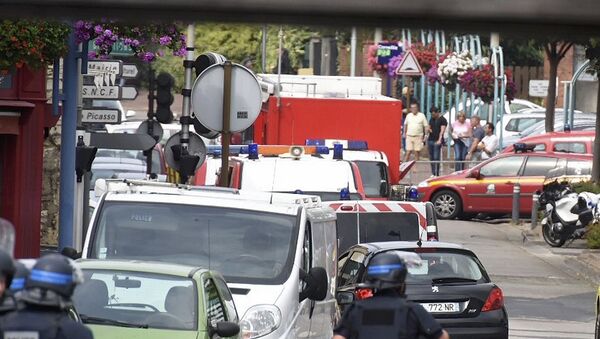 French Presiden Francois Hollande said that hostage crisis in northern Normandy region is a terrorist attack, the two knifemen had links with Daesh.

According to the France Info news outlet, both attackers have been killed by the law enforcement.

Visiting the scene of the attack Francois Hollande said the priest’s throat was slit by two knife-wielding attackers "claiming to be from Daesh," Arabic language acronym for the Islamic State (IS/ISIS/ISIL) terror group.

The president, who was speaking at the community of Saint-Etienne-du-Rouvray near Rouen, where the attacked church is located, vowed to continue the fight against Islamism.

French PM on 'Barbaric' Church Attack: 'We Will Stand Shoulder to Shoulder'
Hollande said he had met with the family of the deceased and expressed his support for all Catholics.

"The pope… shares the pain and horror of this absurd violence," Vatican spokesman Federico Lombardi said as cited by AFP, adding that the attack created "immense pain and worry".

"His Holiness Pope Francis assures you of his spiritual closeness and joins in prayer with the suffering of the families and with the pain of the parish and the diocese of Rouen… The Holy Father is particularly troubled to learn that this act of violence took place in a church, during Mass, a liturgical act that implores of God His peace on earth," the Holy Sea press office's statement reads.