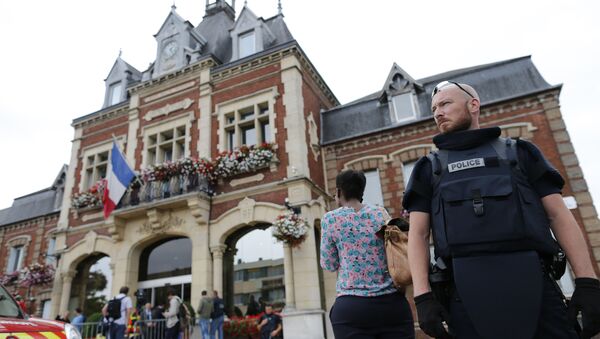 French police took an underage person into custody on Tuesday in connection with the terrorist attack on a church near Rouen.

French Church Attackers Had Ties to Daesh - Hollande
MOSCOW (Sputnik) — The suspect, identified only as HB, had purportedly known one of the terrorists, referred to as AK by French magazine Le Point.

According to the outlet, AK was under house arrest at his parents' home in Saint-Etienne-du-Rouvray in northern France when he took five people hostage inside a local church.

He was ordered to wear an electronic bracelet by a judge after returning in March 2015 to France from Turkey where he was stopped from crossing into Syria to fight alongside Daesh militants.

The jihadist group reportedly claimed responsibility for the church attack, which resulted in the elderly priest being murdered and three other people wounded, one of them severely. The attackers were killed by security forces.