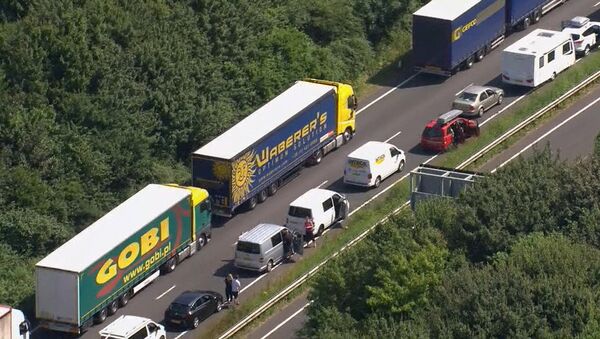 © AP Photo
Subscribe
The chief of the French port of Calais, Jean-Marc Puissesseau, on Monday blamed the French authorities for the traffic jams on the border with the United Kingdom, saying that he was ashamed of the delays faced by UK tourists heading to France on vacation by car.

MOSCOW (Sputnik) — Over the weekend, UK vacationers had to endure hours in traffic on roads leading to the UK port of Dover, from where they intended to cross the English Channel by ferry or train via the Eurotunnel, with some having to spend the night in their cars as delays surpassed 15 hours.

“I am very ashamed of this situation. I am so sorry for the British passengers starting their holiday with so long a wait because of controls… And if the French police is obliged now to control because of all the terrorism we are facing, I can understand it, but what I cannot understand is that they don’t put on enough policemen to control,” Puissesseau told BBC Radio 4’s Today program.

France introduced security checks on its borders following a terrorist attack in Nice on July 14, when a truck rammed into a large crowd celebrating Bastille Day. At least 84 people, including children, were killed and hundreds of others were injured. Daesh, outlawed in Russia, claimed responsibility for the attack.