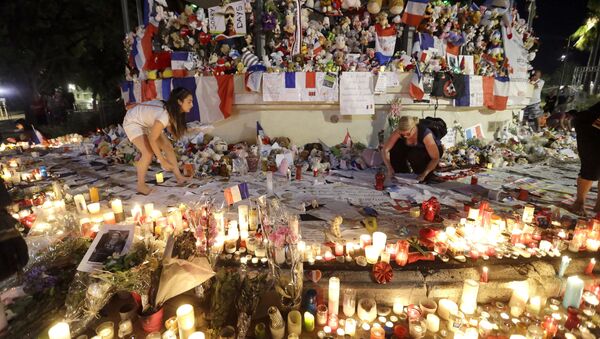 No French official was punished following last year terror attacks in Paris as well as recent tragedy in Nice, George Fenech, head of the parliamentary commission investigating the incidents, said to RT.

MOSCOW (Sputnik) – Fenech also said that it is necessary to investigate, why French intelligence services failed to expose terrorist cells responsible for the attacks.

"I have to acknowledge that since the terror attacks on Charlie Hebdo, Hypercacher Supermarket, Bataclan and the recent tragedy in Nice nobody was punished, nobody demanded to revise the political course, no high-ranking official was removed from the office. I am beginning to think that the concept of responsibility disappeared in this country. I do not know whether those responsible for the tragedy in Nice will be punished," Fenech told RT in an interview.

Why French Government Ordered Destruction of Nice Massacre Video Footage
Since 2015 France has faced a number of deadly terrorist attacks.

In early January 2015, Islamists killed a total of 17 people in attacks on the Charlie Hebdo satirical magazine's office and a kosher food shop in Paris.

On November 13, 2015, terrorists conducted a number of coordinated attacks in the French capital, killing 130 people and injuring over 360.

On July 14, a truck rammed into a large crowd celebrating Bastille Day in the French city of Nice. At least 84 people, including children, were killed and hundreds of others were injured.

Daesh terrorist group, outlawed in many countries including Russia, claimed responsibility for the attacks.