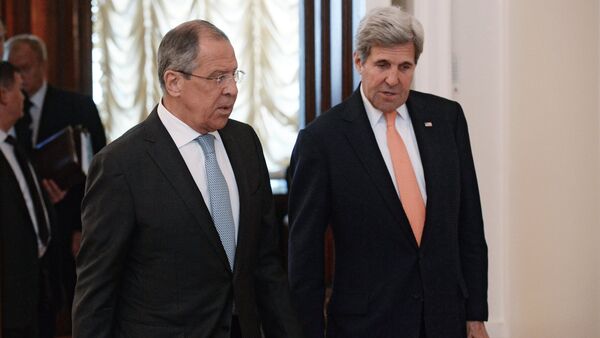 During his recent visit to Moscow, US Secretary of State John Kerry voiced several preconditions for US-Russia cooperation in Syria.

According to Lavrov, Kerry called for the immediate resignation of Syrian President Assad without giving any explanation of his position.

"They say that we could join our efforts in the fight against terrorism […] but first we need to agree that we remove Assad from power," Lavrov said, speaking at a national youth educational forum.

According to Lavrov, Kerry is convinced the vast majority of Syria's population doesn't support Assad. In response, Lavrov suggested that the new president in Syria should be elected in a democratic way.

Moreover, Lavrov negatively assessed Western policy in the Middle East and North Africa and referred to the West as "a bull in a china shop".

"What is happening in the Middle East, in North Africa is a direct result of a very incompetent, unprofessional attitude to the situation. In an attempt to maintain their dominance, our Western partners have acted like a bull in a china shop," Lavrov said.

Turkey No Longer an Obstacle to the US-Russian Cooperation in Syria
Syria has been mired in civil war since 2011, with government forces loyal to Assad fighting numerous opposition factions and extremist groups. The United States and their western allies have many times tried to accuse Assad of being responsible for the bloodshed and insisted on his resignation.

Following Russia's military success in Syria (Russia deployed forces in the country at Assad's official request), many experts and media sources argued that Western countries gave up their demand to overthrow Assad and focused on the fight against terrorism. However, Kerry's statement shows that the West is far from giving up its initial approach.