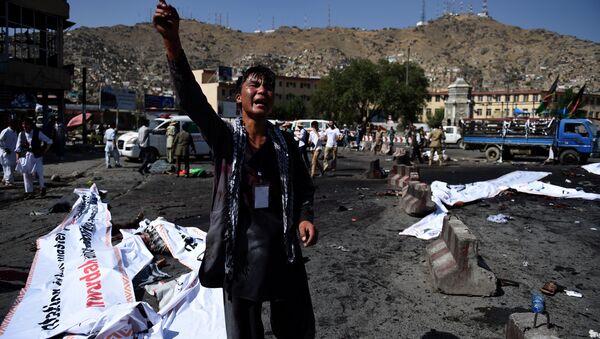 Daesh claimed responsibility for a suicide attack which killed around 20 people and wounded 170 more during a mass demonstration by Hazara minority in Afghanistan's capital Kabul on Saturday.

Awful news coming through of suicide bomber at peaceful demonstration in #Kabul, many casualties. #Afghanistan pic.twitter.com/46DYGCEKpM

​Thousands of the rally participants were protesting against the route of a planned power line because the route bypasses areas populated by Hazara.

Authorities confirmed that the explosion was caused by one of three suicide bombers. The second attacker failed to blow himself up, and the third one was eliminated by police.

Afghanistan is in a state of political and social turmoil, with government forces fighting the continuing Taliban insurgency, while other extremist groups, such as Daesh, outlawed in many countries including the United States and Russia, have also expanded their activities both in the country and in neighboring states.