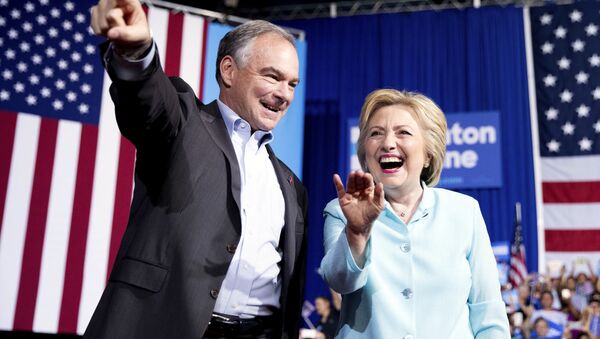 The Hillary Clinton campaign surprised nobody in the political establishment by defying all logic going for the most heinously crooked and boring sidekick this side of Mike Pence.

Emailgate 2.0: WikiLeaks Cache Shows Democrats Conspired to Stop Bernie
"Let’s be really clear: It should be disqualifying for any potential Democratic vice presidential candidate to be part of the lobbyist-driven effort to help banks dodge consumer protection standards and regulations designed to prevent banks from destroying our economy," Democracy for America executive director Charles Chamberlain said in a statement Thursday.

"Our presidential ticket cannot beat the bigot by simply being not-Donald Trump," reminded Chamberlain whose group propelled Bernie Sanders in the primary. "To win in November, our ticket need to have an unquestionably strong record in the fight against income inequality, one of the defining issues of the 2016 election."

​Hillary Clinton, by contrast, has calculated that her campaign does not need the support of the Bernie voters to dispatch Donald Trump in November instead positioning herself to capture some of the Republicans who are dismayed with their nominee’s uncouth temperament, harsh words, and proclivity to walk the line of racism all too often.

In Kaine, Hillary is choosing the US Senator from Virginia who has a long history of executive experience as that state’s former Governor with a personality that is unlikely to steal the show from the Democratic nominee. Kaine is also the epitome of a Beltway establishment politician, however, which won’t play well with the Bernie Sanders crowd.

Kaine notably voted to provide President Obama fast-track negotiating authority for the controversial Trans-Pacific Partnership deal that would fetter away American sovereignty to an unelected cabal that can force US taxpayers to compensate companies whose products violate the country’s health and safety standards. The secretive deal, many worry, would also lead to more outsourcing of US jobs and a further crackdown on American workplace protections. Kaine’s spokeswoman confirmed that the US Senator is a proponent of TPP saying that he was "obviously favorably inclined" to the deal.

​His policy on regulating Wall Street may be far worse even than his position trade. Maine state Rep. Dianne Russell explained that "Kaine, in what many consider a signal to Wall Street, signed two letters this week to banking regulators and the Consumer Financial Protection Bureau urging them to loosen regulations of the financial industry. That sentiment flies in the face of the majority of democratic voters who supported both Clinton and Senator Bernie Sanders."

​The Virginia Senator has also called for greater NATO presence to combat the threat of Russian "aggression" in Crimea and serving as a resounding critic of Moscow’s efforts to stabilize Syria arguing that President Putin only looks to prop up Assad rather than combat Daesh.