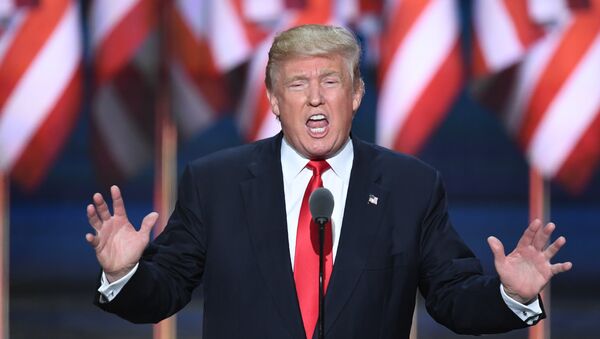 Billionaire Donald Trump says the United States is no longer at the top but will get there if he is elected president.

CLEVELAND (Sputnik) – Billionaire Donald Trump told the Republican National Convention that he is the voice of American workers.

"We don’t win anymore but we are going to start winning again," Trump said at the Republican National Convention, adding "America is a nation of believers, dreamers and strivers that is being led by a group of censors, critics and cynics."

The United States needs to prove that it is still free, independent and strong, Trump emphasized.

Trump said he will be US citizens’ "champion in the White House."

'I am The Voice of American workers'

Accepting the US Republican party’s (GOP) nomination for president, Trump stressed "I have no patience for injustice" and said that he has no sympathy for leaders who do not stand for their citizens.

Trump emphasized that he will put Americans first, not globalism, and that he will be the voice of workers who have been neglected.

"I am your voice," the billionaire said.

Trump critiqued the Obama administration for the current economic situation, saying that corruption is as high as ever in the United States.

"My message is that things have to change and they have to change right now," Trump said, also emphasizing that "crime and violence will soon end" and "peace and prosperity" will be restored in the United States.

According to Trump, he has seen firsthand how "the system is rigged."

The billionaire spoke against trade deals that have stripped US citizens of their wealth.

"We are going to fix the system so that it works fairly and justly for each and every American," Trump said.

We are going to win fast against terrorists

Donald Trump has also promised to defeat Daesh terrorists if he becomes US president.

"We are going to win fast."