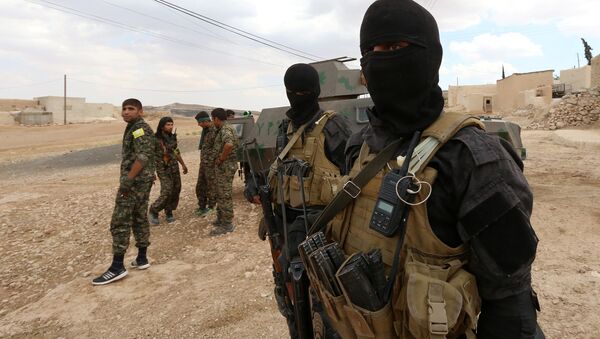 The civilian death toll from the US bombing of the towns of Toukhan Al-Kubra and Manbij in Syria's Aleppo this week is likely to be far higher than the 140 reported fatalities, US analysts told Sputnik.

WASHINGTON (Sputnik), Martin Sieff – The National Coalition of Syrian Revolution and Opposition Forces said in a statement on Wednesday it had called on the US-led international coalition against the Daesh to immediately suspend airstrikes in Syria in the wake of the attacks.

"My opinion is that the number of civilian casualties is far more than the US is willing to state if the recent announcement of US drone casualties is any indicator, advocacy group KnowDrones.com Coordinator Nick Mottern stated on Thursday.

Mottern noted that the attacks with their high civilian death tolls, including children, occurred after it had been announced that the US armed forces were relaxing their attack guidelines and that this might mean more civilian casualties.

According to some reports, US aircraft misidentified fleeing civilian families for Daesh forces and attacked them.

"The bombing that resulted in these deaths is done in support of forces seeking to drive Daesh out of Manbij," Ohio State University Professor Emeritus of International Law Professor John Quigley acknowledged.

Although the total number of people killed in the attacks had yet to be conclusively established, it was already clear that there had been a been a substantial death toll in the two towns, Quigley pointed out.

"Extreme care must be taken under humanitarian law in such situations" by air forces tasked with such operations, he cautioned.

To date the United States has said only that it is investigating whether civilians were killing in the bombing. All participants in the hostilities in Syria must assess in advance of bombing what civilians may be affected and must desist from bombing where civilian casualties are likely.

Photographs taken in Toukhan Al-Kubra after the air strike revealed the dead bodies of children, no more than three years old, lying under rubble.

The US Department of Defense will investigate recent reports that US-led coalition airstrikes killed civilians near the Syrian city of Manbij, Secretary of Defense Ashton Carter said during a press briefing on Wednesday.