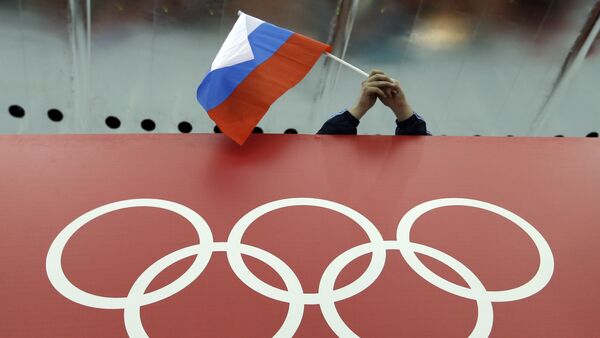 In Deep WADA: Famous Russian Pranksters Learn Truth Behind Doping Scandal
On Thursday, the Court of Arbitration for Sport rejected a Russian appeal and upheld the International Association of Athletics Federations (IAAF) ban on Russian track and field athletes participating in the 2016 Rio Olympic Games. The Court effectively said that Russian athletes will not be able to participate, whether or not each individual athlete was guilty of doping.

Speaking to Radio Sputnik France, Jean-Claude Killy, a renowned triple Olympic champion in alpine ski racing, suggested that the CAS's decision to uphold the IAAF recommendation regarding the 68 Russian athletes 'did not make any sense'.

"I am quite surprised that the IAAF is insisting on this; it makes me very sad, frankly, because I am a former athlete and because I find that these sanctions do not make sense, given that the results of the anti-doping tests on these athletes did not come back positive. So I was very surprised to see that they are being punished; they have nothing to reproach themselves for."

"By the way," Killy noted, "the Russian athletes' spokesperson, Yelena Isinbaeva, was very clear about this. I feel a deep sadness from this decision, and I hope that the IOC will find a way to avoid the injustice that has been done here."

Putin Calls for Independent Anti-Doping Committee With Foreign Experts
Russian officials have pointed out that the present investigation conducted by the World Anti-Doping Agency (WADA) is based on a single witness account. Killy agreed that additional investigation must take place before the decision to ban the athletes collectively is made.

"I believe that even though an investigation was carried out at a high level…it was completed in a very short period of time. Not one Russian was questioned. Experts and scientists who were in the labs during the Olympic Games in Sochi didn't see or hear anything. The Russian president was not aware of any wrong-doing; therefore, it's impossible to speak of 'state-sponsored' doping."

"Moreover, [investigators] believe the testimony of one person, who is now hiding in the United States; I believe that this was all a bit too harsh, and that everything was completed a bit too quickly."

On Thursday, Mahiedine Mekhissi-Benabbad, two-time silver medalist in men's steeplechase, told Le Monde that the scandal around the Russian athletes was clearly a case of double standards, given that conditions for testing doping in other countries are often times much more lax than Russia's. For instance, the athlete said, in Kenya, athletes are called ten days in advance and told that they will be tested. "Why is Russia being deprived of the Olympics, and not Kenya?" he asked.

USSR Fencer Nazlymov Urges IOC Head to Protect Russia's Olympic Hopefuls
Asked what he thought about the issue, Killy emphasized that while he was not an expert on testing for doping he, would like it if "this extremely serious case was given the serious approach it deserves, so that everyone has the opportunity to say everything they need to say."

Finally, asked whether political considerations may have gone into the IAAF's decision, the Olympian emphasized that he hoped not, adding that "if this is the case, it would be a great pity. Because then we would be going beyond sport, and sport is not supposed to be used for political reasons. This would be a great, great pity."