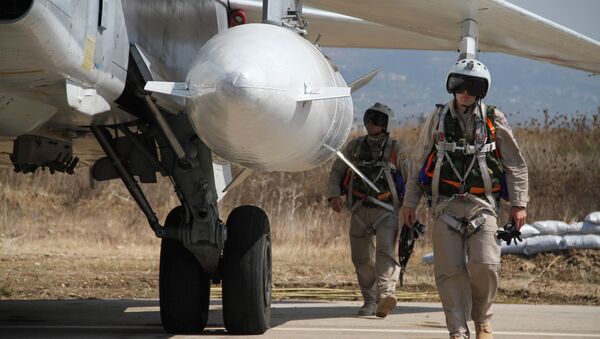 There are signs emerging that healthy forces in Washington have realized the need to partner with Russia in Syria to defeat Daesh (ISIL/ISIS), despite other voices in the US foreign policy establishment opposing any cooperation with Moscow and urging the Obama administration to launch military action against Syria's President Bashar al-Assad.

American hawks cannot reconcile themselves with the prospect of US-Russian cooperation on Syria.

"While Assad prepares to deal a body blow to the rebellion, the Obama administration is poised to enhance cooperation between US and Russian military forces in Syria. If implemented, this plan could prove yet another setback, not only for the administration's gravely flawed response to the crisis in Syria, but also for US policy toward Russian aggression more generally," Michael G. Waltz, a former policy aide to Vice President Cheney, and former US Senate foreign policy aide Lorianne Woodrow Moss write for War on the Rocks.

Washington Has No Alternative But to Cooperate With Russia in Syria
According to Waltz and Moss, there are at least five reasons why Washington should not work hand in hand with Moscow to solve the Syrian crisis.

First, they believe that Washington and Moscow are "ultimately working at cross-purposes in Syria." Second, they insist that the Russians are not trustworthy. Third, they envisage that the agreement "is likely to strengthen Assad's hand" in the long run. To make matters even worse, they claim, the deal could strengthen Vladimir Putin's hand.

And, finally, "these are not the forces the United States wants to prevail in the 21st century," Waltz and Moss stress, referring to Damascus and Moscow.

While none of the reasons voiced by the experts hold water, the question arises whether there is "a viable alternative strategy" that will help the US realize its plans in Syria without teaming up with Russia.

Washington's 'Objective in Syria Since War Began is to Remove Assad'
According to the experts, the answer is to take "military action against the Syrian regime." In fact, Waltz and Moss echo the much discussed dissent memo inked by 51 State Department diplomats that urged the Obama administration to crack down on Assad.

Steven Heydemann of the Brookings Institution also believes that —Russian cooperation in Syria will bear no fruit unless Bashar al-Assad steps down.

"Today, the sovereignty claimed by the Assad regime is a legal fiction, sustained only by the massive military support of Iran and Russia," Heydemann writes.

"Military cooperation with Russia that is not tightly linked to a transition process will not achieve stability in Syria," he claims.

It still remains unclear why the experts name the Assad resignation as their major precondition for defeating Daesh in Syria.

Threat? 'Washington Has Forgotten How Putin Lent the West His Helping Hand'
"To normal people living in the actual reality-based community, the idea that the US should attack the main opponent of ISIS (Assad) to bolster the fight against ISIS seems idiotic," Daniel McAdams of the Ron Paul Institute for Peace and Prosperity wrote in his June article.

However, there is an influential foreign policy camp that is pushing ahead with the idea that Bashar al-Assad should be ousted before Washington and its allies deal a mortal blow to Daesh.

In light of this, Waltz and Moss' allegation that "the defeat of [al-Qaeda and Daesh] is, in the eyes of the Kremlin, secondary to propping up the Assad regime," sounds ludicrous.

So what are the reasons why Washington should join Russia in Syria to defeat Daesh and al-Qaeda?

First, it was Vladimir Putin who convinced Damascus to eradicate its chemical weapon stockpiles and thus helped Washington solve the Middle Eastern problem through diplomatic means.

Second, the Russian Aerospace Forces were the ones who severed Daesh's main supply routes in Syria and dealt a heavy blow to terrorists during the course of Russia's efficient air campaign, in addition to playing a pivotal role in liberating Palmyra.

Third, Russia has great experience in tackling the terrorism problem and has "the kind of intelligence that [US] don't have," as Professor Stephen F. Cohen said in one of his recent interviews on the John Batchelor Show, arguing that no other country is better positioned to fight radical groups, including Daesh, than Russia.

Fourth, Washington has no alternative but to cooperate with Moscow in Syria since Russia has more leverage with Damascus than the United States ever had, as US analyst Daniel R. DePetris stressed in his recent opinion piece for The National Interest.

And lastly, Moscow remains open to dialogue and ready to lend its helping hand to its international partners regardless of the all-out anti-Russia propaganda campaign being propelled by some political forces in the West. Russia's top priority in Syria is to eradicate the terrorism threat, as one of the major challenges posed to Russia's national security.

During her latest interview with Sputnik, Russian Foreign Ministry spokeswoman Maria Zakharova shed some light on US-Russian negotiations over Syria.

"Our view is that the actions and steps the US Secretary of State is taking show us that healthy forces in Washington have indeed realized the need for collective action. However, we see too that there is another camp in Washington that has not yet fully realized this need or thinks that cooperation with Russia is not a priority," Zakharova told Sputnik.

"We are sure that the proposals we continue to make and the level of cooperation we have demonstrated in the recent past, with respect to the demilitarization of Syria's chemical weapons, for example, as well as instances of counterterrorist cooperation in Syria, give reason to think that we and the Americans can work together effectively," she stressed.